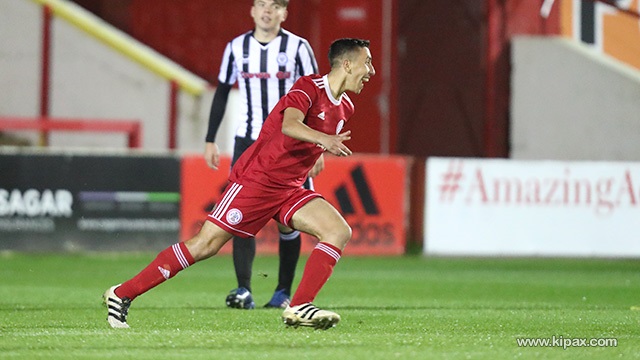 The Under 18s beat Rochdale 1-0 in the last round and take on Coventry City tonight in the second round at the Wham Stadium with a 7pm kick off.

“We were delighted to get through against Rochdale as they are a good team, they are top of our league and we have played them three times this season and have been something of a bogey side for them,” said Lodge.

“We beat them in two cups but lost to them in the league and, while they probably had more possession in the first round, we did have some luck and defended magnificently.

“Coventry are a Category Two club and it will be a test for us but we are just pleased to be at home. Last season we beat Morecambe away and Wrexham away and then were hoping for a big draw in the third round and, no disrespect to Shrewsbury, but we got Shrewsbury away. It would be great to get to the third round this season and have the chance of a big draw.

“There has been a good tradition for Accrington in this competition. We have had a few good little runs, we made the last 16 a few years ago, we have beat Bristol City and West Ham over the years and one year we lost at Crystal Palace but it was a good experience for the players.

“It’s a great competition and I love it. As a player I made it to the semi-final with Everton so I hold it in special regard.

“These players are hopefully the future of Accrington so it would be great for them to have a good crowd tonight supporting them.”

It’s £5 for adults and £2 for Under 16s and there will be extra-time and penalties if needed tonight.