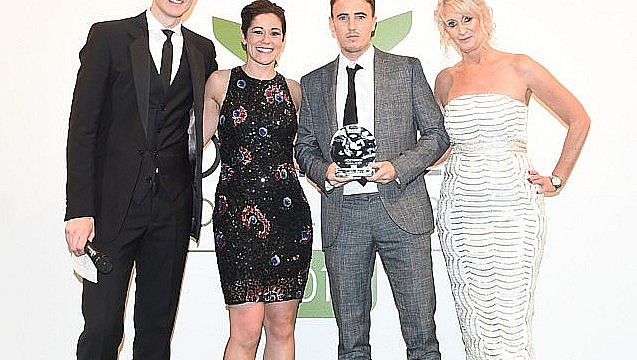 Sean McConville has spoken of his pride at winning League Two Player of the Year at the 2017 Northwest Football Awards earlier this week.

McConville scooped the award on Monday evening, beating off competition from Blackpool’s Kelvin Mellor and Carlisle’s Nicky Adams, to join a line-up of elite winners at Old Trafford Cricket Ground.

“It was a good night and I was buzzing to win the award,” he said. “A lot of it goes down to the Accrington fans, it was a public vote and I was delighted that they came out and voted for me – a very proud night for myself and my family.

“The ceremony itself was great, there was a lot of famous faces there, it was very well presented and then to pick up award topped it off for me.”

The winger capped a whirlwind 24 hours by leading Stanley out for their FA Cup replay with Guiseley on Tuesday night, with usual skipper Seamus Conneely on the bench.

The Reds were edged out on penalties but McConville insists focus has already shifted to Saturday’s home league clash with Newport.

“It was a honour to lead the lads,” said the 28-year-old. “I see myself as one of the more experienced in the dressing room so to the armband is a huge honour for me.

“On the night we created eight or nine clear cut chances but in the last three games we’re not putting it in the back of the net as we were earlier in the same.

“If we keep creating those chances sooner or later they are going to go in – hopefully somebody is going to be on the end of a hiding from us soon!”

Stanley are at home again tomorrow when they face fellow promotion-chasers Newport.

“We’ve struggled at home to them [Newport], in the last couple of years,” continued McConville. “They finished really strongly last season, similar to ourselves, they put a great run together to keep themselves in the league.

“They’ve managed to keep a couple of their experienced players and they’ve added a couple of good players in the summer too.

“I know Michael Flynn really well, he’s a great guy and he’s done a terrific job with them since he went in – it’s going to be a tough game.”