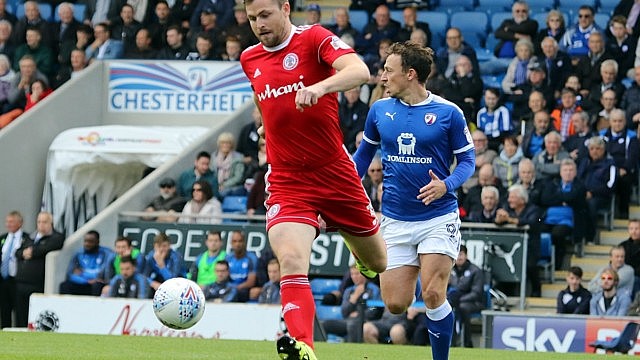 Stanley defender Mark Hughes believes the Reds are picking up ‘important’ points this season, in matches that they would have lost in previous years.

Hughes and co have been left frustrated after they were held to consecutive draws at Cambridge and at home to Newport.

But, ahead of tonight’s clash with Wycombe Wanderers, the 30-year-old is choosing to remain upbeat and focus on the positives, with Stanley sitting in third place in Sky Bet League Two.

“Saturday was a tough game,” he said. “They [Newport] came here and done a decent job on us. They packed the midfield, five at the back; they aren’t easy to play against.

“This last couple of weeks our attacking threat has been nullified a little bit, we aren’t finding the back of the net as freely as we did earlier in the season.

“But look we’re still picking up important points even when we don’t play well, this time last year I think we would have lost that game 1-0, so there’s positives to take. It’s a long season and that could pan out to be a vital point for us.”

The Kirkby-born centre back, now in his third season at the Wham Stadium, has been a mainstay of John Coleman’s solid back four this season and ‘Yozza’ believes that it’s so far, so good for Stanley’s ambitions of promotion this season.

“I’d say we’re on track,” said Hughes. “The gaffer has drilled it into us from day one that he wants promotion and if you don’t want that, you don’t need to be here.

“We worked out that two points a game will send you up, we can’t worry about anyone else, we need to just keep hitting our targets and focusing on what we can do.”

Read more from Mark Hughes by picking up a copy of tonight’s programme!