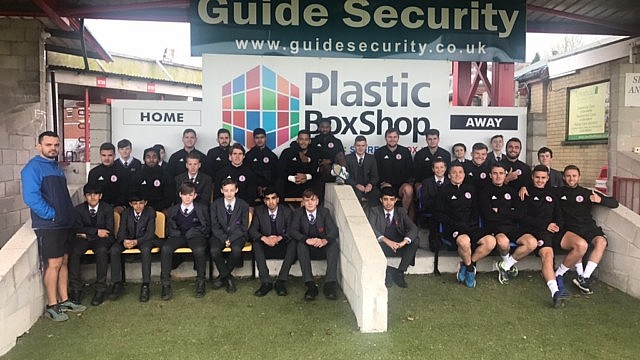 The school has a high percentage of disadvantaged children who want to play football but struggle to afford the boots that they are required to wear to play competitive 11-a-side football.

Mr Hamill, P.E teacher at BCHS, contacted the club reaching out for donations from the players through groundsman Martyn ‘Buzzer’ Cook and was stunned by the response from the Stanley players who donated several pairs of their boots.

The students came to the ground to thank the players, watch them train and also collect a few autographs – they even received another pair on the day from striker Billy Kee!

Mr Hamill said: “Buying football boots can be quite a big outlay for some of the families at our school and what inspired it was that we had 45 kids out playing football fixtures one afternoon and out all of those we had to beg, steal and borrow about 28 pairs of boots for them to play – occasionally we would have to make substitutions based on the kids shoe sizes – it was less than ideal and we desperately needed to get hold of some.

“I asked Buzzer more out of hope than expectation, but he came through and the lads donated several pairs of boots, we can’t thank everybody at the club enough for that.

“We’ve asked a couple of clubs in the past, who are possibly a little bit better off financially than Accrington and they haven’t been able to help us, so for them to help us out speaks volumes about type of club Stanley are, it’s fantastic.”

The donated boots have already been put to good use at the school and Mr Hamill hopes that the children’s visit to Stanley can help inspire some of his students to greater things.

“My Year 9 team got to wear some of them for the first time in their last game,” he added. “It allowed them to step out onto the pitch with a bit of pride in themselves and not feeling like they’re worse than anybody else – they felt good about themselves and you could see the difference it made to their performances.

“We have a few really academic children, some disadvantaged and some who are really struggling, hopefully coming here will show the lads where hard work can take you and inspire them to push themselves to achieve what they want in life.”