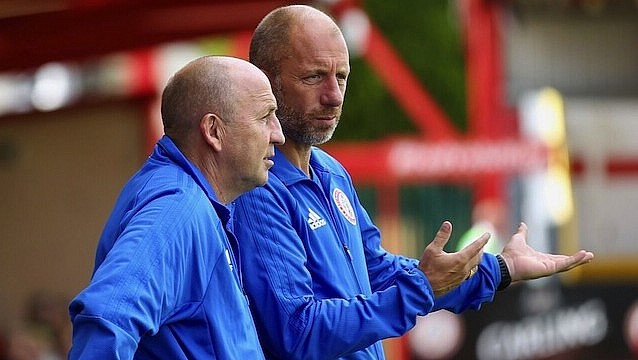 John Coleman says that he has a fully-fit squad to choose from ahead of Saturday’s visit of Barnet in Sky Bet League Two.

Stanley head into the game with Rossi Eames’ men off the back of last Saturday’s 2-0 win at Crewe, that also saw goalkeeper Max Stryjek return to the match day for the first time since suffering a hamstring injury on his debut at Morecambe.

The boss also reported that he has no fresh injury concerns but did provide an update concerning the situation of one of the Reds’ loanee defenders.

“We’re looking good personnel wise,” said Coleman. “It’s probably the first time this season that we’ve got nobody injured. This is probably the strongest squad that we’ve had and this is now what I get paid for, to make the tough decisions.

“Max’s return is crucial to us, Chappy has done well in his absence but we need two top goalkeepers pushing one another.

“Tom Dallison has gone back to play a couple of games with Brighton U23’s but that was written into the terms of his loan that we could do that, it keeps him match-fit should we need to call upon him and also helps out their squad as they are currently suffering a bit of an injury crisis.”

With two wins and two defeats from their last four league matches, the Stanley boss admits he is frustrated by his sides lack of consistency but believes that they haven’t lost too much ground on the league’s frontrunners.

“It’s acceptable because the teams around us aren’t doing much more,” he said. “Maybe only Luton have pulled away in recent weeks, it’s frustrating really that we probably deserved to win hands down against Stevenage and lost but at Crewe they probably deserved to get a draw from the game and we hold on to win.

“But you have to take what you can, when you can, in this league. We know we can play better but when we get it going we do play well, we’d like to do it for longer spells in games.

“We had an appeal for a penalty for a foul on Kayden Jackson turned down just before half-time on Saturday but the move leading up to that was just fantastic, it was breathtaking football and we want more of that, sometimes you have to take risks and maybe we need to do more of that in the final third – it’s a fine balance between not being wasteful and being too cautious.”

Jordan Clark has scored twice in his last two games, while Sean McConville struck the decisive goal in a tight game when Stanley beat Coventry and Coleman is delighted with the contribution form his midfield men.

“It’s important for the midfield to chip in and that’s something we’ve spoke about,” he added. “We had a spell last season when we only scored one or two in 10 and when you’ve got all areas helping out I think it takes the pressure off your main goalscorers.”