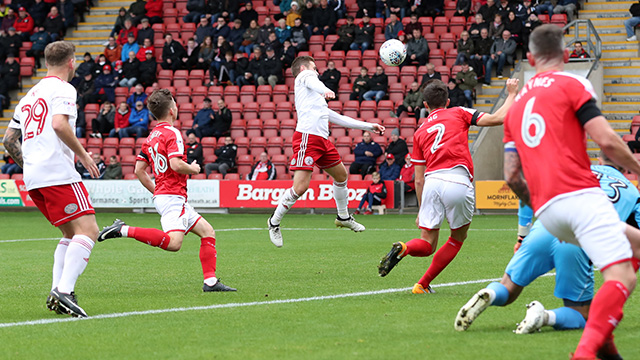 Jordan Clark is hitting the goal trail with two goals in his last two games to take his tally to four for the season.

The winger scored in the defeat at Stevenage last Tuesday and then celebrated the vital second at Crewe on Saturday as Stanley returned to winning ways to move up to third in the League Two table.

The Reds were two-goals up within eight minutes at Gresty Road with a Billy Kee penalty and then Clark’s eighth minute goal and they held out with Crewe captain Michael Raynes sent off eight minutes from time in the 2-0 win.

“It was a great start to the game,” said Clark. “We started really positively which the gaffer wanted us to do, we got ourselves into their final third and tried to create as much as possible. We managed to test them with plenty of balls into the box and ask them questions.

“The early penalty helped us out massively, it settled us down and to get the second so soon made it even better, it made us comfortable and able to manage the game – we wanted to try and score more but it was more important that we saw the game out as we couldn’t do that at Stevenage.

“The second goal was crucial and I think that showed in the rest of our performance, they grew into the game in the second-half and had a couple of chances but we didn’t come under too much threat.”

About his goal Clark explained:  “I remember I nearly got tackled in the lead up to my goal but I managed to win it back,” he said. “I played Kayden (Jackson) through and just tried to get my head down and get myself into the box.

“Thankfully the gamble paid off and the keeper parried his shot towards me, it’s fell kindly and I’ve managed to direct the header home.

“The gaffer spoke with me in pre-season and said that he wanted more goals and assists from me and I think that I’ve started off quite well. It’s pleasing to get two in two games and hopefully I can keep it going – I’m aiming for 10!

“It’s important we share the goals through the side, Billy and Kayden have both been on fire this season but adding goals from the midfield is the sign of a successful side.”