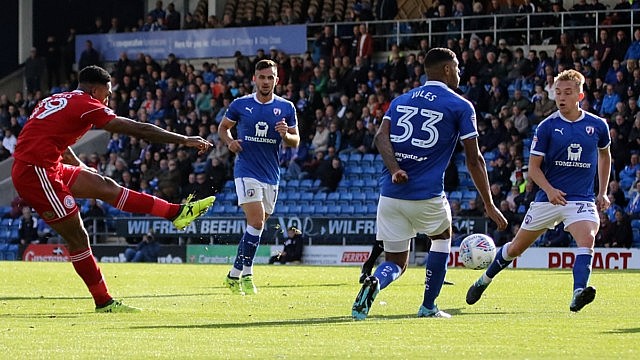 Saturday’s match-winner Mallik Wilks says he is loving life at Stanley since joining on loan from Leeds in the summer.

The forward notched his second goal for the club, an 83rd minute strike, to give his side all three points at Chesterfield, and he has hailed the travelling supporters who inspired the Reds to victory.

Wilks announced himself to the Stanley faithful with a dramatic injury-time equaliser on his debut at Notts County last month and he was delighted to go one better at the Proact Stadium.

“I was going through a bit of a drought,” he laughed. “It’s amazing really, to come on and score the winner is brilliant. To get the equaliser at Notts County was great but to go and get all three points for the lads is even better.

“The travelling fans we’re brilliant again and it was nice to be able to share the m0ment and celebrate my goal with them. They made the effort to travel to Chesterfield and support us and it was important that we were able to repay them with the win.

“I’ve had a great start to my life at Accrington, it’s been the dream start and I hope it can continue.”

Wilks has been brought off the bench to great effect for Stanley so far but doesn’t want to be known as a ‘super sub’.

The 18-year-old insists he is determined to force his way into John Coleman’s starting 11 and is targeting tomorrow’s visit of Middlesbrough U21’s in the Checkatrade Trophy to make an impact from the start.

“I’m looking forward to Tuesday,” he said. “I’m happy to help the side in whatever role the gaffer wants me to, but it would be nice to show what I can do from the start.

“Hopefully if I get the opportunity I can take it and give the manager something to think about.”

Ticket’s for the visit of Middlesbrough U21’s are still on sale with the special price of £5 for adults and just £1 for U12’s.