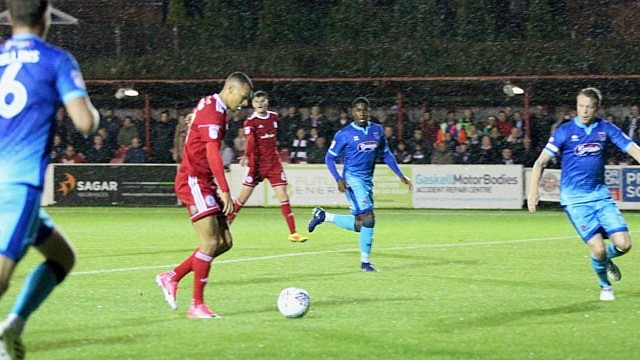 Nothing to fear: Kayden

Striker Kayden Jackson is hopeful that Stanley will rediscover their winning mentality ahead of tomorrow’s trip to Chesterfield.

Stanley lost 2-1 at home to Grimsby on Tuesday, just their second home league defeat of this calendar year, but Jackson insists that the Reds don’t need a defeat to keep them motivated.

“Regardless of the midweek result, we’d be going out looking to win the next game,” he said. “Of course you don’t want to be losing matches but we have the right mentality here to make sure that we put in a strong performance and get a result in the following game.

“I’m looking forward to getting back out on the pitch and I’m sure the lads are too, we want to put in a good performance and make amends for Tuesday.”

Before that loss to Grimsby the Reds sat second in Sky Bet League Two, but the 23-year-old says the early season form is no shock to those inside the Stanley dressing rooms.

“It’s no surprise at all,” he said. “Some of the teams that we’ve come up against so far have been tipped to be up there this season and some of them have spent quite a bit of money and we’ve seen nothing that we should be afraid of.

“Even watching the Football League highlights shows there’s nothing for us to fear and personally I feel we’ll do very well this season if we can find that bit of consistency, that will be the key to having a successful season.

“Prior to Tuesday night we’d made a good start and found ourselves sitting second in the table, we’ll keep on going, keep working hard, find that consistency and getting better as a team.”

Jackson’s equaliser on Tuesday night saw him score his fifth goal of the season, but the former Barnsley man insists he would much rather win matches than score goals.

“It’s not just the goalscoring that I’m bothered about,” he added. “It’s playing well and making sure that the lads get the three points.

“I could score 50 goals in a season but that doesn’t necessarily mean that we’ll get promoted or make the play-offs, as long as the team are winning I’m happy to help out in whatever way I can.

“I think even in the games that I haven’t scored in I feel I’ve played well. The Morecambe game I was involved in both goals there and the Carlisle game I played my part in a good team performance.”