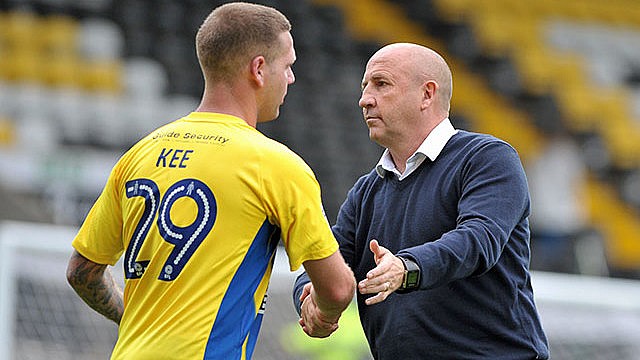 Stanley manager John Coleman has hailed Billy Kee ‘the best striker in the league’ after the forward scored his 100th career goal during the 3-0 win over Carlisle.

Kee has started the season in fine fashion and has been involved in seven Accrington goals, scoring five himself and grabbing two assists.

“I’ve said it for a long time, Billy is the best striker in this league,” said Coleman. “What he brings to us is invaluable, he chips in with the goal but the way he builds up the play is crucial to the way we want to play our football.

“It’s not surprising to see him hitting landmarks like his 100th goal and I have no doubt he’ll continue that for years to come.

“In the past we may have been guilty of overusing Bill and in his job and the way he plays he takes a lot of beatings, physically it’s a tough role to do. But now we’ve got players who we can replace him with and give him a breather.

“We had the luxury on Saturday of playing the last 20 minutes with both of our strikers sitting next to us and that can only help us ahead of Grimsby tomorrow, in the past we haven’t had that comfort.”

Coleman says he hasn’t been surprised by the quick understanding formed between Kee and his strike partner Kayden Jackson.

“I know the way that Billy plays and I know that Kayden has been craving to play through the middle,” he said. “Kayden wants to use his pace and his football brain so I think it’s a great combination for us to have and it’s no surprise for me that they’ve hit it off so fast.”

The manager also provided an update on-loan goalkeeper Max Stryjek who missed Saturday’s game after suffering a hamstring injury on his Stanley debut the previous week.

“We hope Max is going to be back within 10 days,” he said. “So that’s a big boost for us, apart from that we’ve got a good bill of health running throughout the squad.

“Obviously we have got Ben [Richards-Everton] still out, we should have him back in training by the end of next week and that will be like getting a new signing in to have him back and available.”