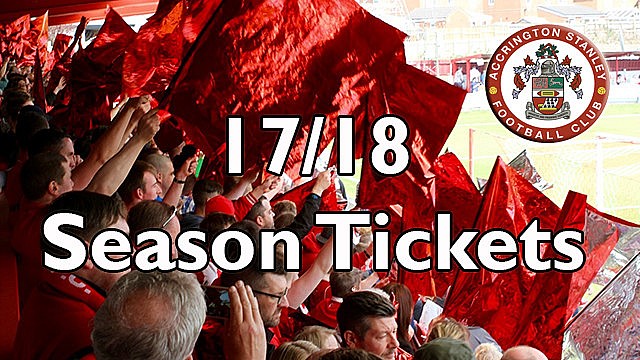 Following the end of the Early Bird Season Ticket Offer we ended the campaign at a 33% increase on the same point as last season. As part of the Early Bird incentive we offered the chance to win a new signed Accrington Stanley Shirt for the upcoming 2017/18 season and also a signed ball by the current 2016/17 squad.

The winners are listed below:

Season tickets are still on sale and the pricing structure is as follows:

Hospitality Season Tickets –  Supporters can now upgrade their Season Ticket to include full match day hospitality in the Sports Bar Lounge.
Seasonal Hospitality prices are below, or as a standard season ticket holder you will be able to take your place for an additional £35;

Note – U18s and U12s must be accompanied by an adult

You can collect your season ticket form from reception, download here, or you can call the Club and apply over the phone using 01254 356950 between 10am and 4pm.

Help us spread the word, smash the target and join the #Redvolution

We would like to thank you for your support!