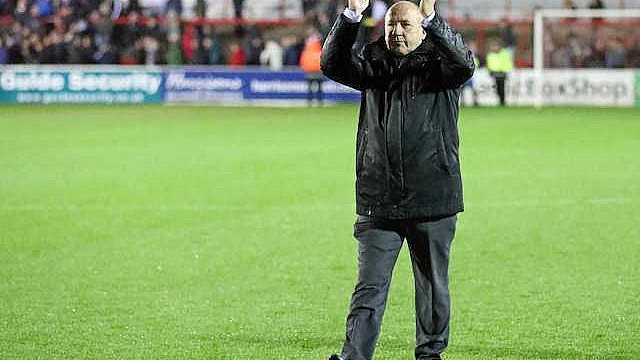 John Coleman has urged his players to show Forest Green the same ruthless streak that they have displayed in recent trips to fellow strugglers Chesterfield and Port Vale.

Stanley have travelled to both sides this month while they have been in the relegation zone, picking up 2-1 wins on both occasions.

The Reds make the trip to The New Lawn for the first time in the Football League on Saturday, with Rovers rooted to the bottom of League Two.

“People think because their bottom of the league that it’s a given that we just go there, they roll over and we pick up all three points,” said Coleman. “But I know as well as anybody that this league doesn’t work like that, any team is capable of turning up on the day and beating you.

“If Forest Green make a good start and score early then it’s a completely different kettle of fish. It will be tough but we are going there with every intention of winning the game like we do every week, home or away.

“We’ve faced similar challenges in our last couple of away games and we’ve managed to be single-minded, ride the storm early-on and come away with wins after a professional performance.”

It’s been 11 years since the last meeting between the two sides but the Stanley manager believes too much has changed to draw comparisons to past matches.

“I don’t think you can take to much from the days that we used to meet in the Conference,” he said. “They’re fighting for their lives at the moment. But I know Mark Cooper very well and his teams historically play good, attacking football.

“I know from experience in this league that you can go on a horrendous run, I’ve been on the end of it here, then you can just snap out of it for no given reason, we will be wary of that.

“At the moment there’s a two-point gap between being third and being outside of the play-offs, that’s how fine the lines are.”

Stanley have welcomed Ben Richards-Everton back to first team training this week as the defender steps up his recovery from a dislocated shoulder, and the boss also provided a further update on Kayden Jackson, who limped off after 53 minutes on Tuesday evening:

“We’re going to monitor Kayden during the next couple of days,” he added. “It’s a niggle that he just can’t shake off, he’s had a couple of bangs on it during the match and that’s causing him the problem.”