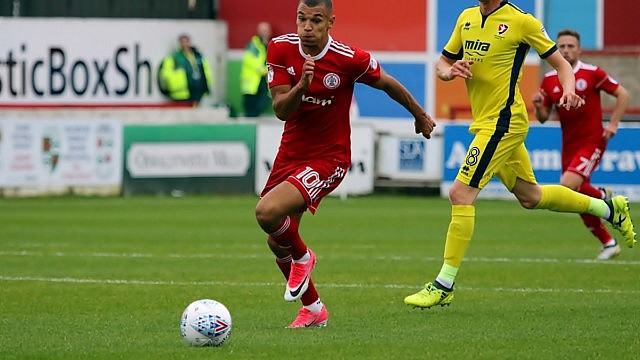 Jackson passed a fitness test ahead of the Cheltenham game on Saturday after a knock in training last week but sustained another injury shortly before he levelled the scores in the first-half.

The 23-year-old, who scored his sixth league goal of the season, tried to continue but was eventually withdrawn 11 minutes into the second-half.

“He’s had a couple of big bangs on his thigh and then on his glute during the game,” said Coleman. “They’re more impact injuries rather than long-term injuries, we’ll have a better idea of how he is after training today.

“They’re uncomfortable but as a striker he will be keen to get out there and play because you can’t score if your sitting in the stands and I thought that he looked a big threat on Saturday and we lost that impetus when he went off.

“Kayden’s become a massive part of the way that we want to play, we could see that from when he first arrived in pre-season, even though he wasn’t scoring we knew he could stretch the opposition and you need that in this league.”

Ben Richards-Everton has been missing since dislocating his shoulder at Notts County but the manager says the centre-back is nearing a return.

He also provided an update on Sunderland loan goalkeeper Max Stryjek who hasn’t played for Stanley since injuring his hamstring just nine minutes into his debut.

“Ben won’t be long,” he said. “He’s stepping up his involvement this week, but Max is going to be a bit longer than we anticipated.

“He’s had another scan on his hamstring and it isn’t good news, but we’ll soldier on and hopefully within three or four weeks he’ll be back training with us.

“We could only sign a goalkeeper who’s unattached, we can’t have an emergency loan, but the free agent market is something that we exploring for cover at the moment.”