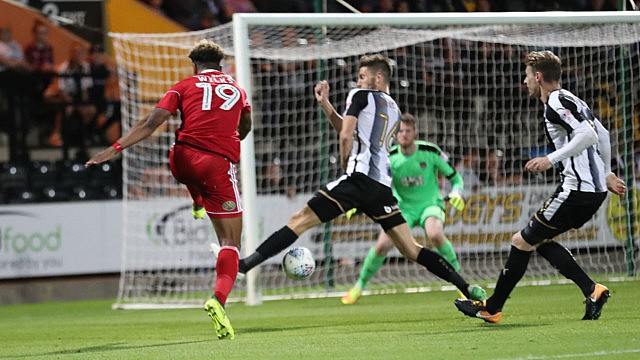 Accrington Stanley’s new forward Mallik Wilks has hailed his injury time equaliser as a ‘dream come true’ as the Leeds United loanee scored on his debut.

The 18-year-old struck in the fifth minute of added time at Meadow Lane to ensure his side left with a point, following a frantic evening of football.

Stanley played the majority of the second half with 10-men and Wilks was initially sent on as a wing back before scoring the crucial goal.

“It’s a dream come true,” he said. “It’s every boys dream to do that on their debut and I’ve come on and managed it.

“The boss put me on as a wing back and just told me to get up there and get at their full backs because they were tiring.

“That’s what I did and I arrived in the box, the ball just sat up nicely for me at the back post and thankfully I put it away.”

Wilks only joined the club on Friday and the striker says it has been a ‘crazy’ beginning to his life with the Reds.

“I’ve had one training session here so to come on in such a big game and score the equaliser is an amazing feeling.

“I said I was here to score goals and I hope I can get more and help to keep the team at the top of the table.”

The 95th minute equaliser sparked wild celebrations at Meadow Lane and Wilks has dedicated his goal to the 154 travelling Stanley supporters.

“The fans were amazing,” he added. “I was so happy to celebrate my goal in front of them, it’s a really big family here and they created a great atmosphere for us.”