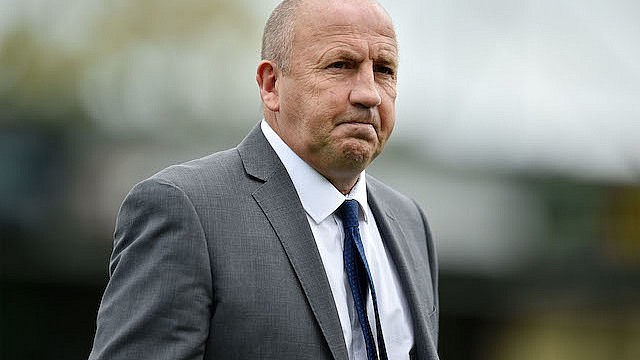 John Coleman has urged his side to make it an uncomfortable evening for Premier League West Brom when they visit the Wham Stadium tomorrow.

Tony Pulis’s side come into the Carabao Cup second round tie off the back of a perfect start to their league campaign with two wins out of two.

But Coleman says his side can use all of the elements available to them as they try to repeat last season’s Premier League giant killing when they defeated Burnley.

“Last season this competition gave us nights that we look back on with pride as a club,” said Coleman. “It’s not often you get to face a Premier League side and we will make sure we enjoy the occasion tomorrow and see how we measure up.

“We hope that our home record means will mean that Tony Pulis and West Brom will be feeling a bit uncomfortable about coming here.

“We’ve got to make it hostile, show our appetite for the game early on, set the tone with our pressing and get the fans behind us from the first whistle.”

It’s three wins from three for Stanley at the Wham Stadium so far this campaign, Billy Kee’s late winner on Saturday ensuring that Coleman’s side maintained their 100% home record.

“We have to use every element of this ground to our advantage tomorrow night,” he said. “It’s three wins from three home games this season and we’d like to keep that record up for as long as we can.

“The cramped changing rooms and the fans being so close to pitch side will be something that West Brom maybe aren’t as used to as us, so we will look to use that.”

The Reds have a hectic fixture schedule coming up, starting with a trip to Notts County on Friday evening but Coleman says he won’t have the same option to rotate as much as his opposite number.

“We can’t second guess what kind of team they’ll put out,” he added. “We’ll have the bulk of the side that played Saturday so it’s all about getting a good session under our belt in training and getting our recovery right. West Brom have the facility to make wholesale changes if they choose to.

“If they put out a strong side our fans get to see some big name players and our lads can test themselves against the best, if they put out a younger side we’ve got a better chance of winning the game.”