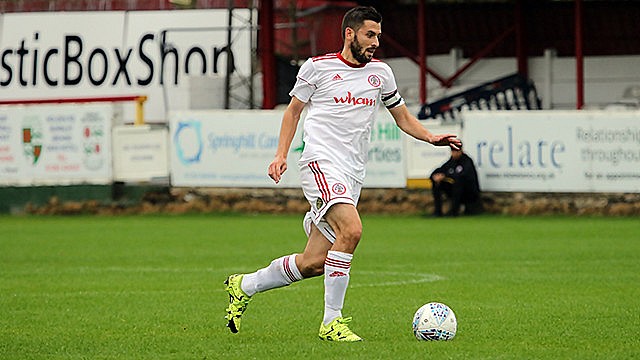 We need to bounce back: Seamus

Seamus Conneely is determined to get Stanley back on track against one of the pre-season promotion favourites Mansfield tomorrow.

Stanley drew 4-4 with the Stags last February which proved a catalyst for their 15-game unbeaten run which took the Reds towards the promotion places.

The captain is still upset from the 3-2 defeat at Yeovil on Saturday and wants to right the wrongs against Mansfield.

“I enjoyed playing in the 4-4 draw and games against Mansfield are usually entertaining games,” said Conneely.

“We know Mansfield will be wound up and chomping at the bit and we have to match that and the big characters in our team need to stand up and be counted.

“We know if we get it right we are a match for anyone in this league and we need to put a few things right from Yeovil.

“I think in games you either win or learn and against Colchester and Preston we won but against Yeovil we learned a lot about ourselves.

“We let ourselves down against Yeovil in a 20 minute spell, going from 1-0 up to 3-1 down at half-time, and it’s frustrating as the three points in August are as important as three points at the end of April.

“We don’t want the three points against Yeovil to come back to haunt us at the end of the season so we have to make sure we get back to winning ways.”

Mansfield, under Steve Evans, have made 13 signings in the close season and have won one and drawn one of the league encounters so far. Evans doesn’t mind his side’s tag as promotion favourites.

“They have made a few additions and are one of the bookies favourites to go up,” continued Conneely.

“We expect them to be up there and we want to get promoted as well so we know a win is important, especially at home.”