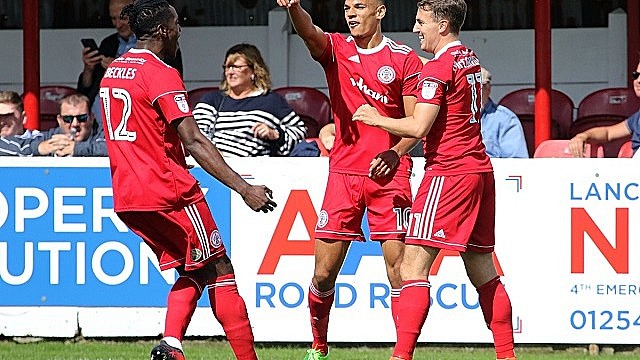 Kayden off the mark

Kayden Jackson has a habit of scoring on his debut for a club – so it was no surprise when he repeated the feat for Accrington.

The 23-year-old was on loan at Grimsby from Barnsley last season and he opened his account in his first game for the Mariners.

So it wasn’t a shock when, after good build-up play by Billy Kee, Jackson latched onto a through ball from Liam Nolan and kept his head to slot the ball past Sam Walker for the first goal in the 3-1 opening day win over Colchester.

“I have scored quite a few times now on my debuts, going back to Oxford City, Swindon Supermarine when I was on loan there and Grimsby last season,” said Jackson, who signed for the Reds from Barnsley in July.

“I had a dream on Friday night that I scored two so I am a bit disappointed I didn’t get the second! I will always take a goal and three points though, that’s the most important thing.

“To be honest, those are the goals I probably prefer, you have to be quick about things and you just have to tuck it away.” 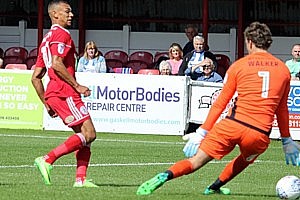 Billy Kee and Omar Beckles added to Stanley’s tally before Colchester grabbed a late consolation – it was Stanley’s biggest opening day win since they came into the Football League in 2006.

“We were gutted we didn’t keep a clean sheet as I think 3-0 was probably the deserved result,” continued Jackson.

“Everyone played unbelievably yesterday and hopefully we can keep it up and see where we can go.

“It’s massive for our confidence going into the Carabao Cup game against Preston on Tuesday.

“We will look to give our all with that, that’s another tough game, but league-wise you couldn’t ask for better, to get that win.

“You don’t want to be waiting weeks or games to get it and now we have it we want to take it into next Saturday.