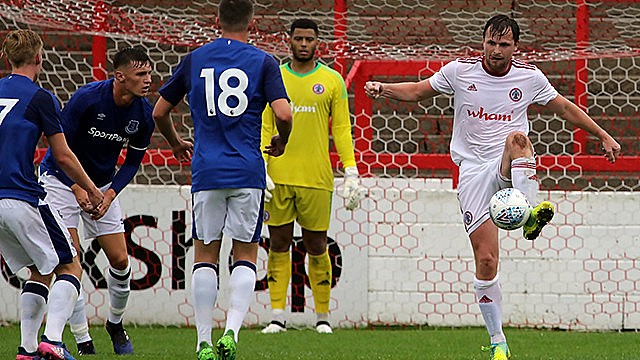 Mark Hughes is hoping Stanley can maintain their ruthless streak in front of goal against Premier League West Brom in the Carabao Cup second round tonight.

The Reds have scored at least two goals in every game so far this season but Hughes knows it will be a tough ask against a Tony Pulis side who haven’t conceded a league goal yet in their two games so far.

“We are pretty ruthless at the moment, every chance we get seems to go in and long may that continue,” said the defender.

Hughes was part of the Stanley team which enjoyed a memorable cup run last season when the Reds beat Bradford and Burnley and only lost at West Ham in the final minute.

“Cup runs are about memories, people may be drawn against a club they support so that makes it special. The league is more important to us but, saying that, we want to win every game we play and West Brom is no different.

“They are an established Premier League side, whichever team they play it will contain quality players and a Tony Pulis side will be full of big strong players and, having watched them against Everton, they are a better football team than people make out.

“He won’t take it lightly and we will have done our homework, like we do on all teams.”

Hughes knows Stanley’s main focus is on the League Two promotion race but doesn’t mind the cup as a welcome distraction.

“It’s only a couple of extra games but what we have to do is learn from the past. We were first class against Preston and then lost at Yeovil and last season, we played well against Bradford in the cup and then were lack lustre against Barnet the game after.

“Our main aim is promotion this season but we have give our all tonight and then make sure we go into Notts County on Friday with the same mentality.”