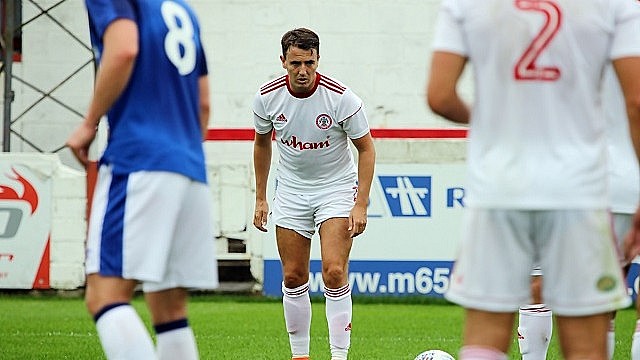 Cup memories spur us on: Sean

Sean McConville knows memories of Burnley and West Ham will spur Stanley on tonight against Championship side Preston North End in the Carabao Cup first round.

The Reds enjoyed cup success in the competition last season, famously beating Burnley in the final minute of extra-time at the Wham Stadium and then only losing to a last minute Dimitri Payet free kick at the Olympic Stadium to West Ham.

Now they begin this season’s cup journey wanting to once again claim an early north-west scalp at the Wham Stadium.

“Preston is an exciting tie and we have seen the benefits of what a win can do in this competition,” said McConville.

“Last season was enjoyable. Burnley was a local derby, live on Sky, and was shown around the world and to win that game was special. It was great for the fans for their bragging rights and to win against a Premier League side was a great achievement for the players.

“I remember sitting and watching the draw after that game and to get to play at the Olympic Stadium was unbelievable. It was a great day for the players and the fans and we were unlucky to not take the game into extra time but as soon as Payet hit the free kick, I knew it was in. It was hard to lose in that way but it was a great free kick from a top player.”

After an opening day League Two win over Colchester, Stanley go into the game against Preston full of confidence.

“Preston is another local derby. We have had a look at each other in a pre-season friendly but this game will be completely different. It will be a lot more competitive and we will be playing to win and progress.

“We had a great win on Saturday against Colchester, we were on the front foot in the first half and took the game to them and it was a great three points. We will now take this confidence into tonight’s game.”

Stanley may face former frontman Sean Maguire who signed for North End in the summer while defender Janoi Donacien is a doubt for the Reds.