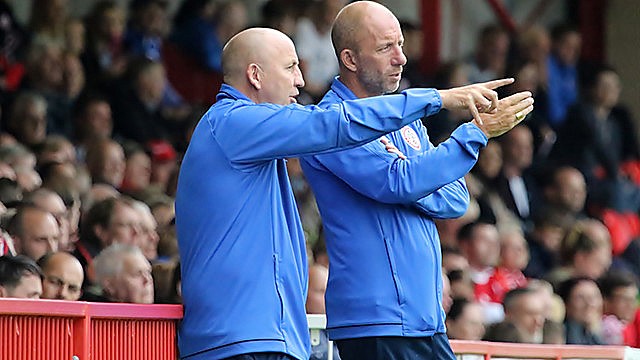 Stanley boss John Coleman says Preston North End will see a different Accrington side in their Carabao Cup tie to the one they faced during pre-season.

Alex Neil’s side claimed a 3-2 victory at the Wham Stadium back in July but Coleman says his side have taken big strides since then.

“We know a lot about Preston and the way they play,” said Coleman. “They really impressed me in the pre-season game here, they had a good work ethic and they moved the ball well.

“That night we didn’t play as well as I know we can and we had a bit of a mixed side out, so I think that they’ll definitely see a much better Accrington this time around.

“We learnt a lot from Saturday’s win over Colchester, there was some very good points and some excellent play. There are a few areas we need to brush up on and we’ll speak to the players about certain aspects that we want them to be getting right more often.”

Following memorable runs in both cups in the last campaign, Coleman has urged his side to create another special night like the Burnley victory.

“We really enjoyed what we did in the cups last season,” he said. “There was some terrific memories made and some really exciting nights for our supporters.

“It’s another local derby and another chance to make a big statement, last year we managed to conquer Burnley so it’d be nice to add another to the collection.

“We’ll have to assess a couple of the players in training and there’s a doubt over Janoi [Donacien] but whatever side we put out will be competitive and one that’s trying to the win the game.”

Sean Maguire could return to the Wham Stadium, having made 33 appearances and scoring seven goals for Coleman’s side back in 2014.

“I’m not surprised at all by how well Sean’s done,” he added. “I rated him very highly when I had him at Sligo then I brought him over with me when I came back here.

“He went to Cork and scored a lot of goals and I’m pleased to see him doing well, his confidence is sky-high at the moment, I hope he goes on to have a smashing career with Preston.”