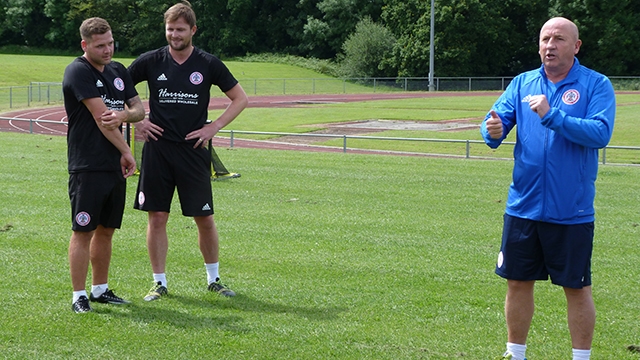 Mark Hughes believes Accrington Stanley will be a huge threat at the right end of the League Two table this season.

Stanley made the play-offs in 2015/16 and made a late charge for the top seven falling just short last season after being embroiled in a relegation battle for most of the campaign.

Defender Hughes believes the Reds will hit the ground running in the new campaign – and cause some of the pre-season promotion favourites problems.

“I think people have started to notice us and we have to embrace that,” said the 30-year-old. “We have to have expectations. No more ‘little old Accy’ for us, even if there is for other people.

“We kicked ourselves last year because we had a slow start. We could compete against all the top teams and we beat all the teams who were promoted at some stage.

“We believe in each other and we know that, if we can start well, we have a chance. It’s easier to start well and stay up there than play catch up. We have good players and we have what it takes to get a good start.

“You look around and see people like Janoi Donacien and Omar Beckles, who had fantastic seasons, staying with the club.

“A few years ago Accrington would have lost players like that but we’re keeping them now and we have to build on it. That can only be good for the manager.

“The last couple of seasons have been ‘what could have been’ or ‘what might have been’ which is an old cliché in football but it means we know what’s possible.

“The manager knows and the players know that, we all believe it. He’s been saying that if anyone doesn’t think we can be promoted they shouldn’t be here. There’s one objective this season and I think all the lads can feel it.”