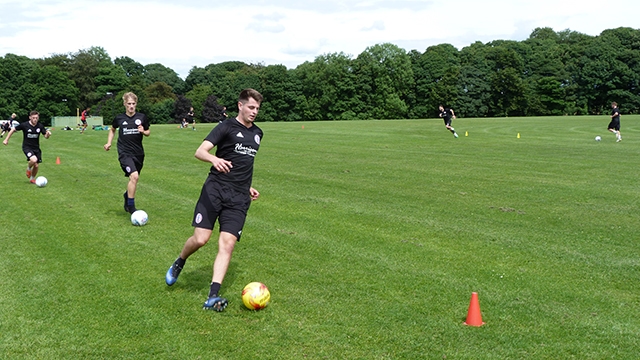 Liam Nolan admits pre-season has been something of a shock – but he now can’t wait for the season to start.

Nolan, 22, was playing part-time football with non-league Southport last season but, as John Coleman’s first summer signing, he has been launched straight into the thick of running from late June.

“It has been hard but I don’t mind it,” said former Crewe defender Nolan. “To go from part-time to full-time is a shock to the system, with double sessions, but we have been saying we think we will be one of the fittest teams in the league.

“It’s all part of being a professional footballer and, when I was at Southport last season, the aim was always to get back into league football and I am happy to be back.

“After being in a relegation battle last season with Southport, the talk here is all positive about promotion and we do believe we can do it.”

When Nolan came to Stanley he relied on his former Northern Ireland Under 21 team-mate Shay McCartan to help him settle in before McCartan signed for Bradford City recently.

“Shay was good as he helped me settle in but obviously he has gone now but all the lads have been great.

“We are all looking forward now. I can’t wait to play against my former club Crewe and then playing against big teams like Coventry will be exciting.

“Accrington have just missed out on promotion in the last two seasons so hopefully this is our season.”