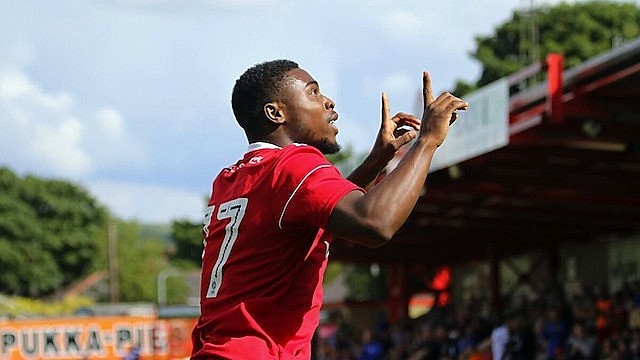 Mekhi off the mark

Mekhi McLeod says he was ‘very pleased’ to notch his first Stanley goal, during Saturday’s 2-2 draw with Oldham.

The 20-year-old winger came on as a second half substitute and announced himself to the Stanley supporters with a stunning strike from 25-yards.

It looked to be the winner, until Courtney Duffus struck four minutes from time, but McLeod says the goal has given him a ‘great boost’ as the start of the new campaign nears.

“I’m very pleased to score my first goal for the club,” he said.

“It sets me up well for the season now and gives me something to push on from.

“Since I arrived last month it’s been my aim to get a goal during the pre-season, it’s a great boost going into the season.

“Obviously we’re all disappointed to concede the late goal because we want to be in that feeling of winning games and doing well, that’s something we’re really focused on here.”

Now McLeod, who signed a one-year deal after leaving Rangers, says he is raring to go ahead of the season opener against Colchester United, in less than two weeks.

“Pre-season has been a good one for me personally,” said the winger.

“Everybody at the club has made me feel welcome, the boys have been brilliant and so has the gaffer and all of his staff.

“We’re all raring to go and determined to make sure we do well and are pushing for those promotions places.”

McLeod and his teammates are back in action on Saturday, when they travel to The Merseyrail Community Stadium to take on Southport.