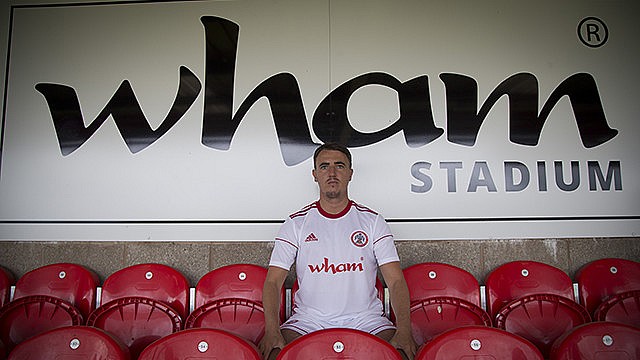 Sean McConville says he is delighted to have extended his stay at Accrington Stanley for at least another two years.

The 28-year-old penned an extension to his current deal this week and says his mind is firmly fixed on gaining promotion to League One.

“It’s a great club to be at,” said the midfielder. “All the players and all of the staff create a great feeling around the place and I’m delighted to get the deal done.

“The fans here are second to none, they’ll have a big part to play with us this year as we all try and pull together towards getting promoted.

“This is a club that’s very close to my heart and I’m very happy to be staying for another two years.”

McConville was a key figure for Stanley last season, weighing in with 17 assists but the midfielder is determined to add more goals to his game.

“I hope I can have a similar season to last,” he said.

“But I’ve set myself the target of scoring more goals, I want to reach double figures. I fell just short last year but that’s definitely the target.

“Hopefully if I do that, then with the talent in the rest of the squad we can reach our number one aim of winning promotion.”

McConville has become the fourth member of the Stanley squad to sign a new deal this summer and he insists keeping hold of important players has been crucial.

“We’ve done well to keep a large part of the squad together,” he added.

“Losing Shay [McCartan] was a big loss but we’ve added a couple in his position and they’ve looked really sharp in pre-season.

“The gaffer has managed to keep the core of the squad that finished last season so strong and we’re looking to carry that momentum with us and start the season in a really positive way.”