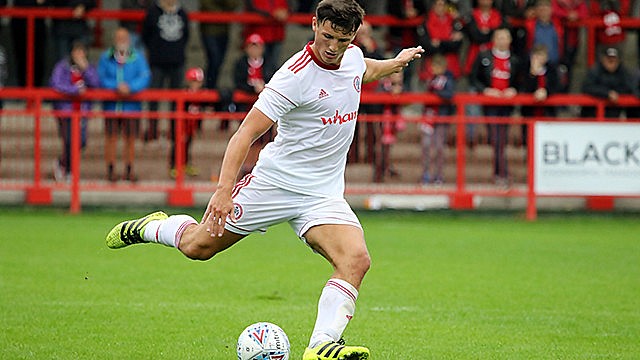 The defender admits pre-season has been tough but knows it’s all about the big kick off against Colchester on August  5th.

The squad took to Pendle Hill on Monday as they look to be in prime condition for the opener.

“Running up Pendle Hill was good, it was a nice day and we ran up there – it is what it is,” said the 23-year-old.

“Things like that are good fun, a few of the lads don’t like it but some take it in stride and it’s all geared to making us better and stronger for this season.”

Stanley have lost against Huddersfield and then drew with Everton U23s before losing to Preston in their pre-season friendlies at the Wham Stadium so far – but Pearson isn’t getting bogged down with results.

“Pre-season has been tough, we have had some good teams come here and give us a good game. We have played top quality teams, we are not playing non-league teams or teams we are expected to beat so it’s been a good test.”

Pearson came on against Preston last night in the second half and scored a superb solo goal in the 3-2 loss but for him the focus is fitness.

“We chopped and changed a little bit against Preston but when you are on the pitch, you just have to give it everything and try and get your fitness.

“I think we have done alright, a few of the goals were a bit sloppy but we will fix that.

“The gaffer wasn’t happy at half-time and even in the second half we still conceded a rubbish goal but we will get it right.

“At least we scored two goals, that’s a plus, there were some positives.

“Personally, it’s good to score, when you are playing you do everything to score and you are glad when it goes in.”

Now he is focused on Oldham on Saturday – and then looking ahead to the 2017/18 season.

“Oldham is a good game to have two weeks before the season starts. I think it will be good test for us as they a team similar to what we will face in League Two.

“I do just want the season to start though,  the pre-season games are hard but they are there for a reason and you need to prepare yourself as much as possible for the first game.”