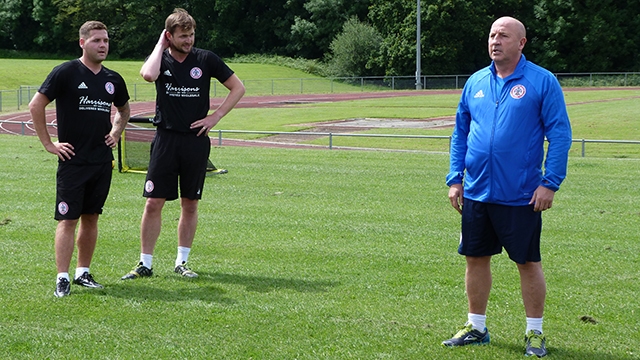 John Coleman is eyeing more recruitment after a positive first couple of weeks of pre-season.

The Stanley manager has already added a number of new faces to his squad, with the likes of Liam Nolan, Mekhi McLeod and Erico Sousa set to make their bow for the club in Wednesday’s opening pre-season friendly with Huddersfield at the Wham Stadium.

But Coley is far from finished strengthening ahead of the start of the League Two campaign next month.

“I’m hoping to make a signing in the next week or so,” he explained. “There may be two or three more in total. It’s important that because we’re not going to have a big squad that we get the right ones in and we’ve identified targets that we think will be really helpful to us and hopefully excite the fans. We’re working on those deals at the moment.

“There are certain areas that it’s clear we need to strengthen. In the forward area we only have Billy Kee and Jonny Edwards as recognised strikers so we certainly have to bring a forward in and obviously we only have the one keeper at the moment. We’ll know more about that this week.”

The manager is keen to emphasise the priority is for new players to come in and not for any to depart after Shay McCartan left for League One Bradford City for an undisclosed six figure fee.

Coley admits there has been interest in other members of the squad but insists there’s no pressure on him to sell.

“We’ve had a few calls about our players but we’re not in a situation where we’re desperate or it’s a fire sale,” he said.

“We have to do what’s right for the club and if that means holding onto our better players then that’s what we’ll do. Now if an offer comes in which is advantageous to us and the player we’ll listen to it. It would have to be big money.”