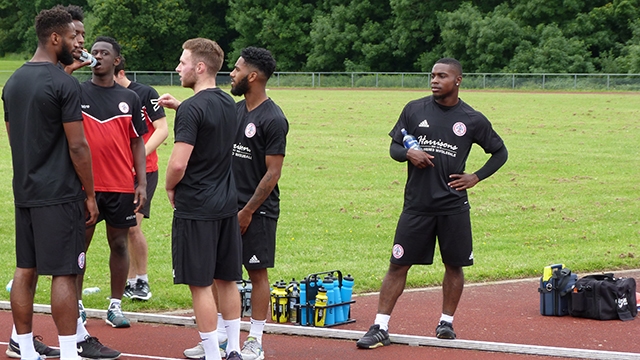 Accrington Stanley have signed tricky winger Mekhi McLeod who is determined to make a big impression this season.

McLeod has signed a one-year deal and can play on either wing. The 20-year-old took part in a behind-closed-doors friendly against Burnley towards the end of last season and impressed manager John Coleman.

“I am really excited,” said McLeod. “I like to think I am an exciting player, I like to run on the ball and create chances. I haven’t yet scored a league goal so that’s my first aim.”

McLeod began his career at Fulham’s Academy where he spent 10 years up to the age of 17. He moved onto Championship side Wolves for two years but didn’t make the first team.

“I then took a gamble and moved to Glasgow Rangers under Mark Warburton which was a great experience but I didn’t make a first team start,” continued McLeod.

Last season, he spent time in the Ryman League before moving onto Eastleigh in the National League under Martin Allen and ending the season at Billericay Town.

“I am over the moon to  sign for Accrington,” said McLeod. “I have read about the history and how they have kept falling short of promotion and I want to help them achieve that.

“I watched them at Stevenage on the final game of last season and we have kept the core of that squad together so we should have a good season. I want to settle at a club now and establish myself as a league professional football player.”

Manager John Coleman said: “Mekhi is an exciting player and one I am sure the fans will be enthused by. Hopefully he will find his football home at Accrington.”

Stanley are just awaiting international clearance on McLeod after his short spell in Scotland.