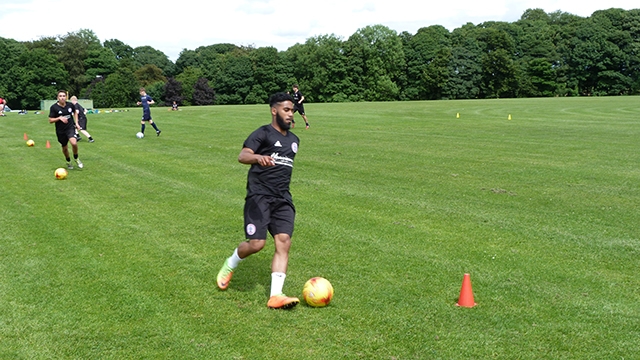 The 22-year-old originally put pen to paper on a deal with the Reds in February but was unable to play due to Football League registration issues.

However he has now got the all clear and has joined the squad in pre-season.

“I am just relieved it is now done and I can get started,” said Sousa.

Sousa started his career at Manchester City aged 15 after coming to England from Portugal when he was 10.

He then joined Barnsley, where he was with Stanley’s Jordan Clark, and that’s when he played for Portugal Under 19s.

He didn’t make a first team appearance for the Tykes, playing for their Under 21s, and then spent a season in the Slovenian First Division, where he played regularly.

He came back to Barnsley to train last season, played for non-league Tadcaster, and then linked up with Accrington at the turn of the year before, when he couldn’t signing for Accrington, moving to National League side Tranmere for the last part of the season.

“It’s a big year for me,” said Sousa, who lives in Leeds. “Playing in Slovenia, it was different, the tempo was slower and it was probably more tactical. Playing in England is more open.

“I was at Tranmere towards the end of last season and it was a good experience being involved with the club as they reached the play-offs and played at Wembley.

“Now I am here for the start of the season and it will be good to finally get the chance to make my league debut. It was easy to come back as I knew a lot of the lads already so it has been easy to settle in.

“My best position is out wide, I’m quick and I like to think I’ve got something in my locker skill wise, I like to be creative, but I will always work hard too.

“It will be my first proper full season in England as a senior pro and I am starting fresh, I am excited and I can’t wait to get going.

“I know it will be tough to get into the team but that will help me. I will keep my head down and be up for the battle.”