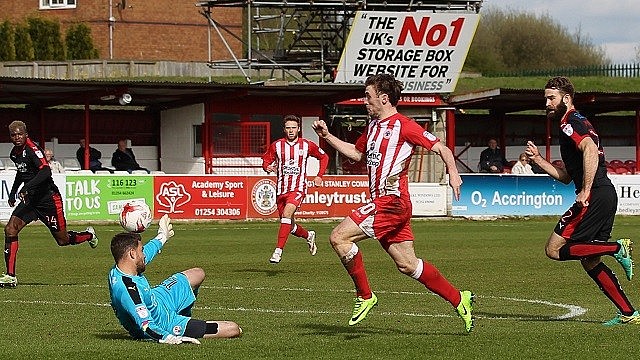 Shay McCartan has signed for League One side Bradford City for an undisclosed six figure fee.

The 23-year-old, Stanley’s longest serving player after signing in July 2013, scored 11 goals from January last season and made his international senior debut for Northern Ireland in June.

A number of clubs were said to be chasing the frontman but it’s Stuart McCall’s side who have won his signature.

“I am looking forward to a new challenge and it will be exciting to play in League One,” said McCartan, who had one year left on his Stanley deal..

“I am sorry to leave Accrington, I have had a great four years here. I have loved my time here and they gave me a chance when I was released from Burnley when no one else wanted me.

“I was signed by James Beattie and Paul Stephenson and then have continued my development under the current gaffer.

“I think the games which stick in my mind are scoring my first league goal against York, it was a last minute header and we drew 1-1 in April 2014. We were in a relegation fight at the time and that was a special moment.

“Then there was winning the SkyBet Player of the Month for March this year, we were winning all the time and it was great to play a part in helping the team win.

“Bradford are obviously a big club and it also means I stay up north as I have lived here since I came to Burnley when I was 16.”

McCartan did have a frightening incident at Valley Parade last season when he collapsed on the pitch in the FA Cup in Stanley’s win there.

“It was scary at the time but I am over it. It was a really good season for me last season. I got 11 goals, I impressed with Northern Ireland and I made my senior debut.

“I knew clubs were watching me and it is unsettling so I am glad it is done now, at the start of pre-season, and I can move on with my career.

“I want to thank all the fans at Accrington who have been superb and supported me in my four years at the club and I wish the club all the best and hope they get promoted this season.”

Stanley boss John Coleman said:  “Shay is a great lad, a superb character and he has worked hard.

“He has been an excellent servant for the club and showed his talents last season which earned him a full Northern Ireland call up.

“While we don’t want to lose him, we can’t stand in his way and the money will be beneficial to Accrington Stanley. We wish Shay all the best.’