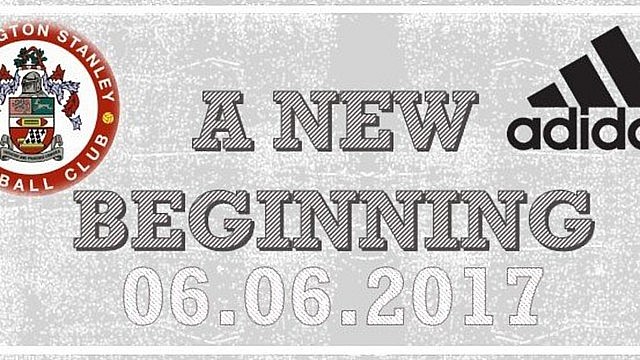 The club are also delighted to announce that the ‘traditional’ home kit of red shirt, red shorts and red socks will once again be donned by the players. The new adidas kit is scheduled to be launched over the coming weeks and in plenty of time for everyone to purchase before the new season begins. Details will be provided via the website and all social media shortly.

James Osborne (Adidas Director, Clubs) stated “Accrington Stanley Football Club have a unique and compelling history. The partnership between adidas and Accrington Stanley from the beginning of Season 2017/18 and onwards will be inspired by the past but look to the future. We’re really excited to provide the kit to help the team hopefully create history on the pitch, with new fanwear and match-wear to bring supporters into the action.”

Accrington Stanley Commercial Manager Daniel Bowerbank stated, “As the club continues to develop both on and off the field, it is a great coup for Stanley to be able to work with such a well-known brand as Adidas. The club is continuing to raise the bar. We can also confirm that we have secured a new partnership with the clubs first ever training kit sponsor Albert Harrisons & Co along with securing a deal with Wham, Guide Security along with Fagan and Whalley as the Clubs main strip sponsors. Working with adidas will assist us in widening our fan base with the additional media and PR coverage we will receive of which is a very exciting prospect for the club. We are delighted to be a part of the adidas family and we look forward to playing our part in contributing to its continued success.”

Accrington Stanley Owner Andy Holt said, “I am delighted our team have concluded this new partnership with one of, if not the, best sports related brands worldwide. It’s a measure of our ambition to build a great community club, and a deal like this is a sign of good progress.”

We look forward to working with all our partners for the new season and the agreement with adidas is one that assists with carrying out the clubs’ values.