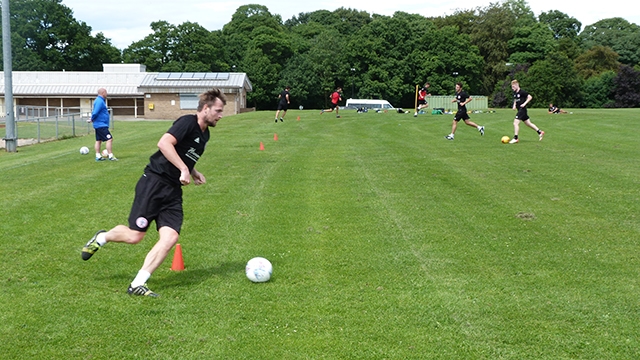 Mark Hughes feels pre-seasons are getting tougher and tougher – and that can only be good news for everyone at Stanley.

The defender returned to training with a number of familiar faces yesterday as the hard work preparing for the new season began.

And the experienced centre back was under no illusions about how hard it was going to be.

“I was running with Scotty Brown and realised that he was the oldest and I’m the second oldest,” he laughed. “Pre-season gets harder because the lads seem to get a little bit younger and quicker and fitter but as you get older you manage yourself better and just seem able to get on with it. You can prepare yourself for what’s coming. Physically it gets a lot harder as you get older but mentally it gets easier if you see what I mean. You know your own body and how to manage it.

“On the first day there are always a few nervous bodies because you’re wondering what you’ll be doing but it’s been good so far and the lads have been working hard.”

Hughes is one of a number of players from last season’s squad staying after having options taken up to extend their deals.

He thinks that gives John Coleman a good starting point to work from.

“We have got a good core of the squad who have been here quite a while and if we want to do something at this club then this season is a massive opportunity,” he said. “We’ve got players in our squad who are certainly good enough to play higher and if we can stay together this season there’s no reason why we can’t have a good season.

“There are younger lads coming in and fighting for the shirts but I’m not going to give mine up lightly just because I’ve hit 30. Hopefully I still have my best years to come. I’ll be fighting as hard as anyone to get my shirt, stay in the side, keep fit and stay strong.”