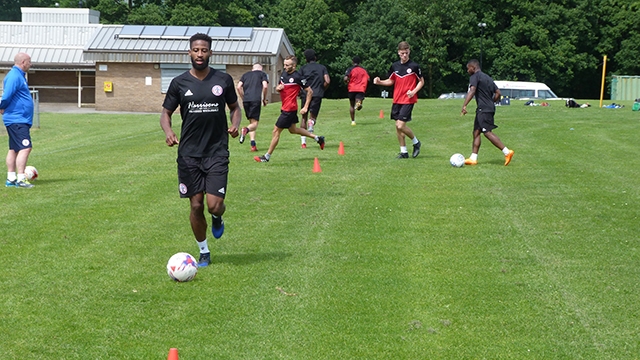 Janoi Donacien has signed a new extended contract at Accrington Stanley until 2019.

The defender, 23, signed for Stanley last season on a one-year contract with a one-year option but has this summer put pen to paper on a deal which will keep him at the Wham Stadium for longer.

“This contract gives me a lot of security and, since I came at the start of last season, I have enjoyed my football here, the squad gelled together well and it was an easy decision,” said Donacien, who spent three years at Aston Villa with time  on loan at Tranmere, Wycombe and Newport before joining the Reds.

Donacien signed the day before the season started last year, was thrown straight into it as Stanley struggled at the start but then just missed out on the play-offs at the end.

“Last season, there were a lot of ups and downs but thankfully the season ended pretty well, except for the Newport game where we felt we let ourselves down.

“We know we were good enough to get into the play-offs but we have kept the majority of the players from last season and now want to push on.

“These were especially at home where we lost to Plymouth and Newport and threw leads away against Morecambe and Wycombe. Those results pegged us back but I think we have learned from them.

“We have all come back, we are fresh, everyone knows everyone and we know what each other can do so there is a positive feel around the place.

“Mansfield are the favourites this season but I feel it’s about us and what we can do, not about anyone else.”

One thing Donacien does want to do this season is score more goals – he got one last season against his former club Newport.

“I don’t go up for set pieces but I know I should score more, hopefully that will come this season!”

Donacien lives in Kirkby with a number of the Stanley players and he admits that has been an experience.

“It certainly helps you settle in with everyone – players get to know each other very well, like loan signing Noor Husin who slept on the sofa last season. The lot this year are messier though!”