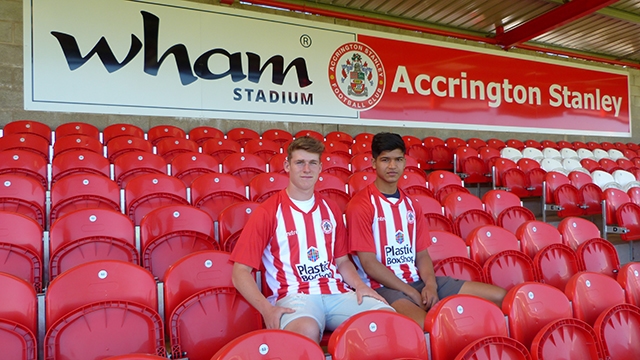 Two Stanley academy products have put pen to paper on their first professional deals with the club.

Full back Reagan Ogle and centre half Zehn Mohammed will join the first team ranks at the Wham Stadium this summer.

Australian 18-year-old Ogle, who made his League Two debut as a sub in the final home game of the season against Luton, has signed a two year professional contract.

Blackburn-born Mohammed has committed his future to the Reds a year earlier, agreeing his two year deal at just 17.

“We are delighted that Reagan and Zehn have signed,” said Stanley manager John Coleman. “They have huge potential and we are looking forward to working with them.

Both players have come through the youth ranks with the club and it’s a big boost to under 18s lead coach Andy Gray.

“We’re chuffed for them,” he explained. “This is a great opportunity for them to progress. John and Jimmy have seen them in training and watched them. It’s great that Reagan has already made his debut, it’s a pat on the back for the the academy staff and it shows there’s a progression path from the academy to the first team at Accrington Stanley.”