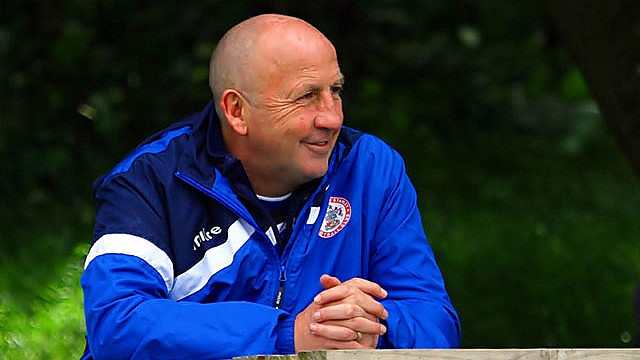 Coley in talks with squad

John Coleman has confirmed he will be speaking to players this week about their futures – but expects to keep the bulk of his squad for the new campaign.

13th placed Stanley travel to play-off chasing Stevenage on the final day of the season on Saturday and look to sign off in style.

And the Reds boss has stated all players will be spoken to today and tomorrow to sort out their futures at the Wham Stadium.

The majority are under contract while some have one year deals, with a one year options.

“I think it’s the first time in my time as Accrington manager, well since the Conference days, that I will have the bulk of the current squad starting pre-season,” said the Reds boss.

“I expect to keep the bulk of the squad and then maybe make a few additions.

“It is a difficult time but players tend to know if they will stay or go. It is people’s livelihoods we are talking about but I have got to do my own job and that’s select the best squad which I believe will go into next season to compete.

“I have to get the balance right of keeping players, allowing players to leave and bringing in new players.

“We are in a good situation where the best players in our squad are not going to get cherry picked with people taking the best and paying a pittance for them. Things have changed.”

Coleman has high expectations of next season as his side look to make it into League One.

“I believe we are in the top seven teams in the league this season so it has been a frustrating season.

“I have to try to improve the squad and it will be good starting the pre-season with players who are already here.

“It’s hard when you have 12 trialists as it’s not fair on them or the players already here. Then players have to get to know each other and it’s about integrating which can be a problem.

“Now there will be more focus on what we are trying to do from the first day of pre-season which is get automatic promotion.”