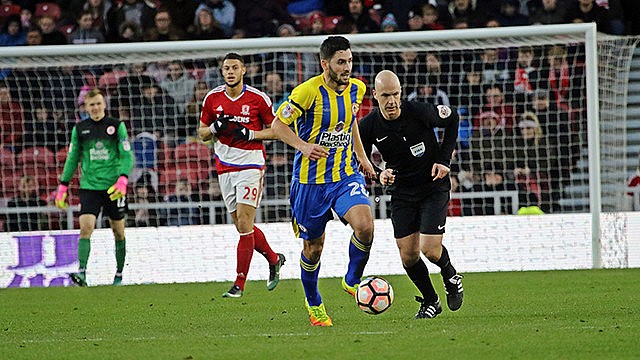 All to play for at Stevenage

Seamus Conneely knows there will be no let-up in the final game of the campaign as the Reds travel to Stevenage.

By a strange twist of the fixture list, Stanley face Darren Sarll’s side for the last game of the regular season for the second successive campaign.

Last season, a 0-0 draw at the Wham Stadium denied the Reds the chance to go up automatically as Stanley failed to score at home for the first time in the 2015/6 season.

This time it’s Stevenage who have all to play for as they lie in eighth place, out of the play-off places by goal difference.

“It is a strange quirk of the fixture list,” said Conneely. “They came here last season and spoiled our day so we will be looking for revenge.

“It was hard to take at the time and then the play-offs were a lottery and we know we have to go there and do our best.”

Stanley’s own play-off hopes disappeared with a 4-1 defeat to Luton on Saturday. After a 15-game unbeaten run which had propelled the Reds towards the top seven, two successive defeats has meant their main aim is to keep their 13th place.

“It has really been a season of two halves,” said the captain, who missed the defeat at Newport with the birth of his first child, Samuel Joseph.

“The first half of the season was difficult, we couldn’t win or score goals despite playing ok.

“I think the Crewe win on New Year’s Eve was the turning point and we kicked on from there but disappointingly have fallen just short.

“We also have had two great cup runs with trips to West Ham and Middlesbrough a highlight of the season although I think the game I will remember most is beating Burnley at the Wham Stadium. That was a special night.

“The best goal has to be Sean McConville’s from the halfway line against Leyton Orient – although I think that has been given as an own goal!

“The season isn’t over yet though and we will be going all out to win at Stevenage.”