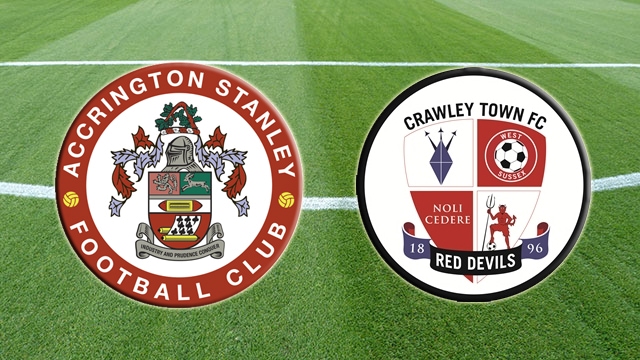 Both sides still have plenty to play for, with the Reds looking to extend their recent unbeaten record.

Stanley’s play-off aspirations remains alive and they come into this fixture in the same position as they did before the Good Friday trip to Blackpool.

With his side four points from the top seven manager John Coleman will be well aware of the value of a win.

But after a goalless draw with Crawley earlier in the season the home side know that the visitors will have other ideas.

Stanley’s unbeaten run is now 14 matches after the 0-0 draw at Blackpool.

They haven’t lost a home game in 2017 and have won seven of the nine league games at the Wham Stadium in that time.

Coleman’s men sit 12th in League Two, four points behind seventh placed Carlisle but only two from Blackpool who are eighth.

The Stanley squad is looking healthy again, as it was for the Blackpool match.

Scott Brown returned from suspension at Bloomfield Road to take his place on the bench as Coleman opted for an unchanged eleven.

Crawley Town survived a relegation battle last season to take their place in League Two again for the new campaign and enjoyed a more promising start.

They were in the play-off mix early on but slid away from contention and find themselves seven points clear of the bottom two with four games left.

Recent form has mirrored their campaign, with a win over Leyton Orient and a draw with Cheltenham coming either side of defeats to Plymouth and Newport.

Dermot Drummy was appointed Head Coach of Crawley Town on a two-year contract in April 2016.

The former Arsenal youth coach helped develop the likes of Jack Wilshere and Cesc Fabregas for the Gunners before moving to Chelsea in 2007.

He delivered the FA Youth Cup to Chelsea for the first time in over 40 years in his first season in charge. He was manager of their under-21 team and regularly led the club’s youngsters in games against the best sides in Europe in the Next Gen series

For more information on the local promotion click HERE