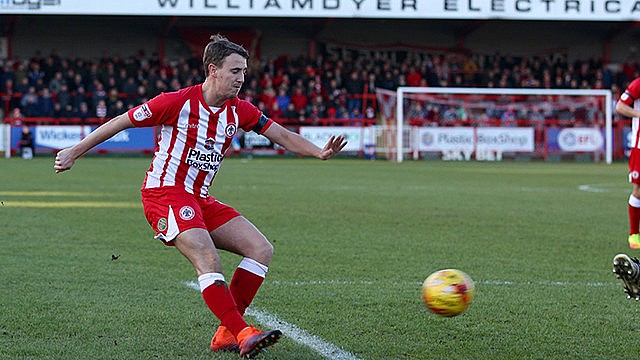 Sean McConville is determined that Stanley won’t end the season with a whimper despite losing their unbeaten run last weekend.

The Reds lost 1-0 at Newport on Saturday to end a streak of 15 matches without defeat and leave them with only a remote chance of making the play-off places.

Next up John Coleman’s side host Luton Town and McConville insists that everyone has been looking ahead and not back after events at Rodney Parade.

“It wasn’t a nice drive home,” he admitted. “We had a game plan. Before the game we studied videos and thought our best way to go about it was to play our normal game but in the actual game it was very tough to do that. We like to play a passing game and it was so hard on the pitch to do that. The week before they’d lost heavily to Plymouth on a carpet of a pitch but I think they’ve won their last three home games 1-0 so that tells you something.

“We’ve just got to dust ourselves down and go again. There were a lot of disappointed lads on that coach on Saturday but we have to go again and win on Saturday now.”

Stanley’s record at the Wham Stadium in 2017 is admirable, with the Reds having avoided defeat at home since December.

And McConville wants that record to continue.

“We were disappointed to lose the unbeaten run but we just have to go again and now we want to go and make sure we don’t lose at home before the end of the season,” he said. “We haven’t lost at home in 2017 and there’s no reason why we can’t keep that up and win our last home game. There should be a good crowd on, the lads will have family there and we want to send them away happy and with three points.”