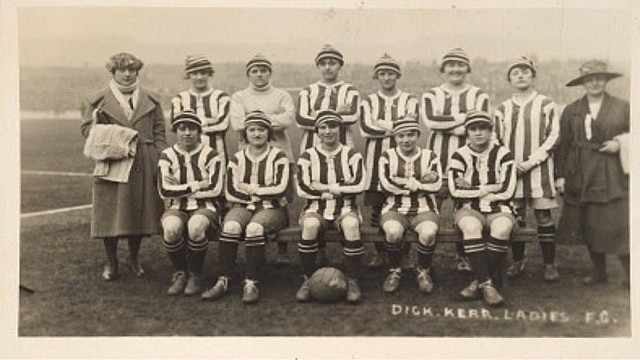 Accrington Stanley Community Trust will be entering a team to take part in this tournament and we are looking for any players that might be interested in signing up to represent us. You will play in the famous Red and White kit of Accrington Stanley FC and will be competing against the likes of Preston, Blackburn and many more teams.

In the history of women’s football, The Dick, Kerr Ladies are the most successful team in the world. They were formed at the Dick, Kerr & Co Ltd munitions factory in Preston, Lancashire during the First World War, these very ordinary factory girls from Preston quite literally took the country by storm.

On Christmas Day 1917, 10,000 spectators came to Deepdale, the home of Preston North End Football Club, to witness the start of the most phenomenal success story in the history of women’s sport. Dick, Kerr Ladies notched up the first of many famous victories whilst raising £600 for wounded soldiers.

On Boxing Day 1920, 53,000 spectators packed into Goodison Park, Everton, to see the  Dick, Kerr Ladies take on St Helens Ladies, with another 14,000 people locked out and unable to gain admission to the ground. Another victory was recorded for the Dick, Kerr team and an incredible amount of £3,115 was raised for charity.

During the War the Government appointed women welfare supervisors and sent them into the factories to oversee the physical well-being of the factory girls and encourage the development of sporting activities. Among those activities was football, and football became the official sport of the munitions girls.  Almost every factory across the United Kingdom involved in war work, had a ladies football team.

Incredibly, in 1921 the FA banned womens football, setting back the development of the womens game for decades.  However, the Dick, Kerr ladies continued to play football around the world until 1965 leaving behind a glittering legacy.

For more on the story of the Dick, Kerr Ladies visit www.dickkerrladies.com

The first national women’s walking football competition will be held in Preston on 2nd July 2017 to commemorate 100 years of the Dick, Kerr Ladies. The competition details are as follows:

If you are interested in playing in this tournament or for more information please contact us on 01254 304071 or email info@stanleytrust.co.uk