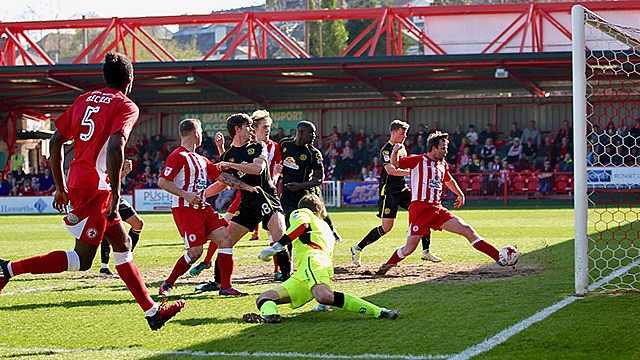 Mark Hughes is delighted to see Stanley still in contention in the top half of League Two after a crucial contribution against Crewe.

The defender scored two goals in a game for the first time in his career as the Reds went from 2-0 down to win 3-2 at the Wham Stadium.

John Coleman’s side are now just four points from the play-offs ahead of Friday’s trip to Blackpool and Hughes believes a barely credible late push for the top seven remains on.

“Making the play-offs from where we were at the start of the year would be a bigger achievement than finishing fourth last season for me,” he said. “Possibly last season it was a disappointment to be in the play-offs and Wimbledon were happy to be there. We’d have that mentality now if we were to make it.

“It’s still difficult, we still have a lot to do to get there but we have a huge game coming up and if we can win it we can make a big stride towards that top seven. We have to believe that.”

Stanley are now unbeaten in 13 games and Hughes is challenging his team mates to keep it going.

“This run is similar to when I came in last year to be honest,” he added. “I got a bit of luck with a couple of injuries to other people, I played the last 15 games and I think we went unbeaten until the end of the season.

“It’s all about momentum and when you have it you just have to keep it going. It was a massive game to win but you immediately look at the next one. Friday could be the make or break game for us.

“Fair play to Crewe. They came and had a go at us and we hadn’t really encountered the kind of system they played and it worked for them. There were a few harsh words at half time and we could’ve either gone one way or the other.

“You don’t go 12 games unbeaten for nothing and we showed that and responded. Once we got one we got the second pretty quickly and as the game wore on I think there was only going to be one winner. Their keeper made a couple of great saves and at the end I was able to get the goal and we saw it out pretty well.”