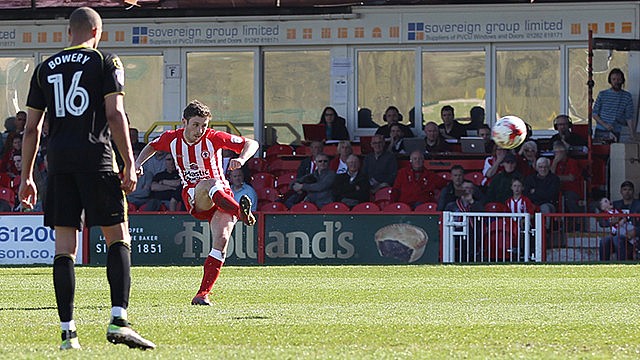 We have no fear: Shay

Shay McCartan admits Stanley don’t fear anyone as they closed the gap to four points on the final play-off spot.

The 12th placed Reds take on eighth place Blackpool at Bloomfield Road on Friday with just two points separating the sides and five games to play.

Stanley are the in-form side of League Two and are on a 13-game unbeaten run after coming back from 2-0 down to beat Crewe 3-2 yesterday.

McCartan scored one of his trademark free kicks, despite struggling with a groin injury during the game. Mark Hughes scored his first league double to complete the comeback.

“It was a good free kick and I am delighted it went in,” said the 22-year-old who won the League Two Player of the Month for March.

“On Friday, when the Sky cameras came it didn’t quite go to plan but I am happy they go in when it matters.

“I always have faith in my ability and I closed my eyes and visualised it going in and luckily it did.

“We fought back from 2-0 down and showed great character to get a result. At 2-0 down we could have chucked in the towel but we didn’t give up.

“In the first half, I think we found it tough, we were struggling and I was carrying my leg.

“We had harsh words at half-time and we came out in the second half a different animal and it showed in the result.

“Once Yozza (Mark Hughes) got one back we 100 per cent knew we could come back, we were creating chances and playing good football in the second half.

“Yozza has been brilliant all season in defence, he hasn’t scored but to score two goals in a game is a great feat for a centre half.”

McCartan has now hit double figures for the season – but doesn’t want to stop there.

“I am happy as I have 10 goals for the season and I want more. We 100 per cent believe we can get into the play-offs, we don’t fear anyone and Friday is a big game.

“Blackpool is now our main focus and we have to forget about the Crewe game and see what happens.

“It has been a weird week for me, getting all this attention but I try to ignore it and put it to the back of my mind and focus on playing well, scoring goals and not getting distracted.”