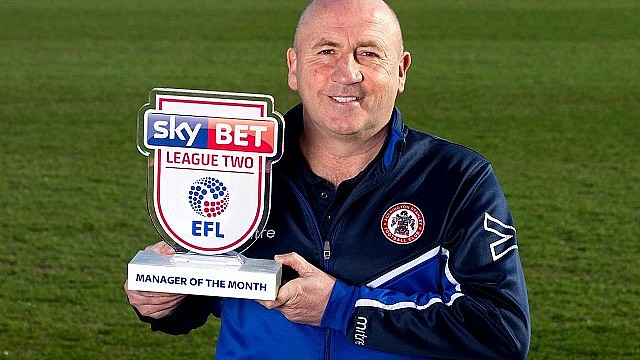 Coley is Manager of the Month

Accrington Stanley manager John Coleman has been named the Sky Bet League Two Manager of the Month for March.

Stanley were in 21st place, six points above the relegation zone when March began.

Five wins and two draws from seven games later and thanks to Coleman’s positivity and nous, they ended it in 13th, seven points off the Play-Offs.

Coleman said: “I am delighted for the players – it is a team effort and the backroom staff deserve a huge credit as well.

“At the end of the day, it’s the team who have got the points and that have done exceptionally well in March.

“Hopefully they can repeat it in April and, if we do, we will have a great chance of the Play-Offs.

“We stuck to our guns when things weren’t going well for us before Christmas, we couldn’t buy a win but we believed in what we were doing and the players stuck with it and now we are getting our rewards. They players are acting like winners.”

He said: “What a great month for Accrington Stanley. John has given them a positive belief that they can match any team in the division and that positivity helped them gain 17 points in an unbeaten month.”

Sky Sports’ EFL pundit Don Goodman said: “Accrington have, by and large, failed to hit the heights of last season where they were moments away from automatic promotion.

“That must have hit the squad hard and it’s not surprising it took until February to show last season’s form again.

“However, currently 12 games unbeaten and fresh from a victory over second placed Plymouth, a shot at the Play-Offs may still be within touching distance with a strong end to the season.”

Sky Bet Football Trading Manager Paul Lowery said: “League Two is such a tight league that even at 13th in the table form team Accrington have an outside chance of promotion.

“This is due to an unbeaten March where the team had to contend with seven fixtures due to games in hand and Coleman has used his squad brilliantly during that period.

“Accrington have left themselves a lot to do; they are still 14/1 to reach the Play-Offs, but they looked dead and buried entering the month at odds of 66/1 and should they get there they would be a match for anyone given their brilliant recent form.”