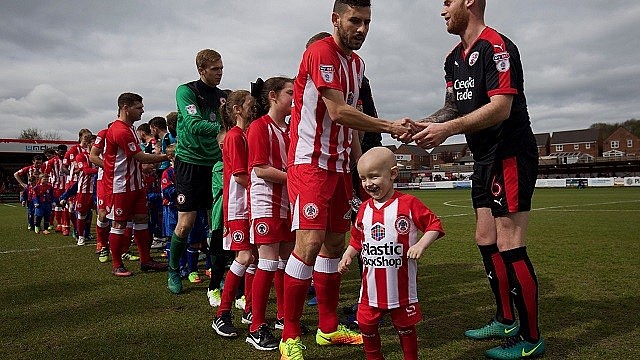 Brave cancer sufferer Charlie Procter will once again lead Accrington Stanley out at the Wham Stadium after an outpouring of support for his cause.

Charlie, who celebrated his fourth birthday on Monday, was diagnosed with Hepatoblastoma, a rare form of liver cancer in 2016.

He first led Stanley out before the 1-0 victory over Crawley Town on Easter Monday to a rapturous ovation by both home and away supporters.

Now, brave Charlie will get the chance to lead the club out for their final home game of the season with Stanley helping for a big push for funds by holding a bucket collection to help the family achieve their goal.

Stanley Managing Director David Burgess, said: “We’ve seen such a groundswell of support for Charlie in the local community and beyond since he led us out before our win over Crawley.

“We thought it was our duty to keep the momentum going and get this wonderful young boy the money that he needs to get better. It will be another wonderful occasion on Saturday at the Wham Stadium and I just hope we can raise some more money to get him on that plane.”

Charlie will be greeted onto the pitch just before kick-off at Saturday’s home clash with fourth-placed Luton Town in what could be mutually beneficial occasion after Stanley manager, John Coleman, described Charlie as a “lucky charm” following win over Crawley.

One person who was deeply touched by Charlie’s story was Stanley midfielder and fan-favourite Matty Pearson who was instrumental in encouraging owner, Andy Holt, to pledge 50p (up to £25,000) for every retweet he received from a post highlighting Charlie’s cause.

Charlie’s mother, Amber, said of the continued support: “It really has been overwhelming the amount of support and kind words we have received, and the help from the club has been unbelievable.

“I’d obviously like to thank Andy for his incredibly generous offer after the last game and everyone else at the club who has supported us. I hope we can put a bit more money in the kitty on Saturday to help my little boy. I really have no doubt that we will – considering how generous strangers have been so far.”

The family is attempting to raise £315,000 to fly Charlie to the USA, where innovative treatments not available in the UK could significantly improve his chances of survival.

If you would like to contribute to Charlie’s treatment visit http://bit.ly/CharliesMemories or for more information visit https://www.facebook.com/charlieschapter/