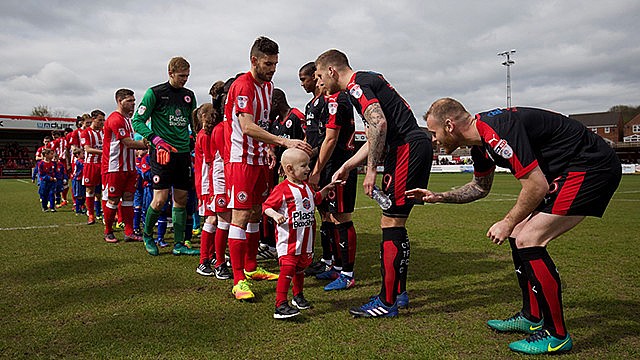 Stanley’s favourite mascot Charlie Procter will lead out two of Lancashire’s EFL teams in the same day tomorrow as his fundraising campaign continues to gather pace.

The four year old, who has a rare form of liver cancer called Hepatoblastoma, will accompany Blackburn Rovers onto the field before their Championship home game with Aston Villa before returning to the Wham Stadium to join the Reds at half time of the match against Luton Town.

The Procter family is attempting to raise £315,000 to fly Charlie to the USA, where innovative treatments not available in the UK could significantly improve his chances of survival.

He’s already been welcomed to Stanley when he was mascot at the last home game against Crawley and made quite an impression.

“We’ve seen such a groundswell of support for Charlie in the local community and beyond since he led us out before our win over Crawley,” said Stanley Managing Director David Burgess. “We thought it was our duty to keep the momentum going and get this wonderful young boy the money that he needs to get better. It will be another wonderful occasion tomorrow and I just hope we can raise a few more quid to get him on that plane.”

Stanley owner Andy Holt has pledged to donate 50p (up to £25,000) for every retweet he received from a post highlighting Charlie’s cause.

The interest in Charlie’s story has prompted television crews and national media to arrive to speak to the family about Charlie and their cause this week.

It’s also brought about the invitation to Ewood Park, where Charlie will travel tomorrow but lead the Rovers players out in his Stanley kit!

If you would like to contribute to Charlie’s treatment visit http://bit.ly/CharliesMemories or for more information visit https://www.facebook.com/charlieschapter/