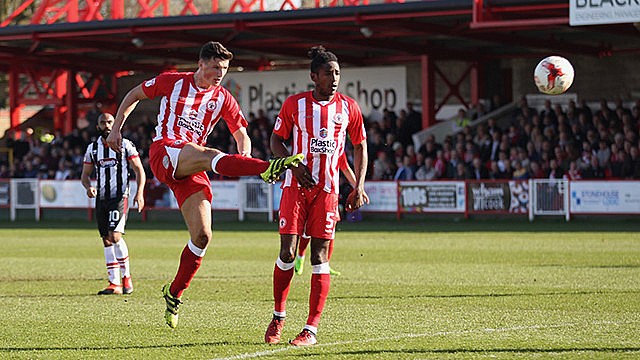 Matty Pearson admitted he wasn’t sure he’d reached a career milestone against Crawley but was instead concentrating on getting three points.

The versatile defender or midfielder made his 100th Stanley appearance as he helped the Reds to a 1-0 win on Easter Monday.

It was a landmark not entirely lost on the former Halifax man.

“I wasn’t sure about the 100,” he admitted. “I thought I had another game because in the programme it showed I needed two more but that didn’t count Good Friday at Blackpool. It was brilliant to mark it by getting the win. Hopefully we can carry on and get these play-offs.

“The gaffer and Jimmy have given me the opportunity in the Football League. They had me at Rochdale and gave me the opportunity here. I’ve done relatively well, I’ve played quite a few games and I’m just made up to be playing football.

“Being in midfield is back to my Halifax days. It’s something different. I don’t know where my best position is but I’m not bothered as long as I’m playing.

“It wasn’t the prettiest game but it’s all about results as you come towards the end of the season and that’s exactly the result we wanted. All good teams don’t have to play to their best every week but still win. We managed to grind out a result and that’s brilliant.

“We all knew that we didn’t play well in the first half but we all wanted to win the game and put it right. It just wasn’t falling for us until the second half. Sean McConville and Shay McCartan showed the qualities that they have and it was a pretty perfect goal. When you have those kind of players you always have a chance. Shay is on fire at the moment.

“Two clean sheets in a row is great. Keeping clean sheets win you games sometimes and we’ve shown that recently.

“We all believe we can make the play-offs and we’re aiming for them. We’re giving it everything we have and just have to keep our fingers crossed. We’re confident because of our unbeaten run and we’re always coming into games buzzing so that’s good.

“All the boys are enjoying it and pulling the same way. It’s enjoyable to play alongside these players and there are smiles on faces in that dressing room.”