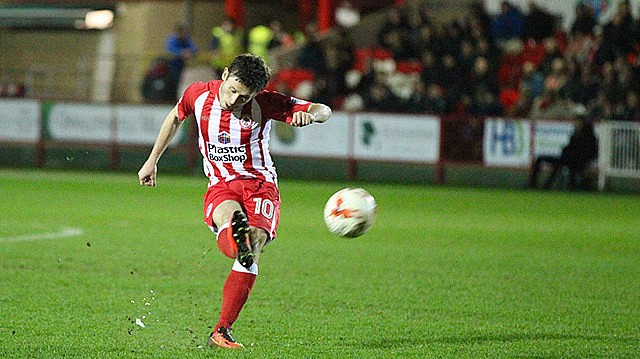 Two goal hero Shay McCartan was delighted that Stanley’s efforts at Morecambe were rewarded with another three points.

The Northern Irishman netted a free kick and a breakaway goal for the Reds at the Globe Arena as John Coleman’s side were victorious despite Aaron Wildig pulling one back late on.

And McCartan’s happy that the local pride as well as the points tally has been boosted.

“Playing Morecambe is our big derby in League Two,” he said. “The gaffer had been saying that we didn’t do ourselves justice against them earlier in the season, getting a man sent off, it being backs against the walls and getting beat so this time everyone was up for it and wanted to make amends. Thankfully we did.

“We were in that mindset that we were all up for it and we pressed right from the start. I had an early chance and we had others. It could have been two or three nil in the first half. On another day they go in. Ultimately we had to work our socks off for the win and everyone is delighted.

“It never crossed our mines that it might be one of those nights. That only happens when you’re on a bad run, like we were on leading up to Christmas. We’re on a run now where we know we can win games and it’s a completely different mindset now. It’s the opposite. You don’t panic because you know the goal is going to come.

“I’m delighted to get a couple more goals and hopefully that can continue until the end of the season.”