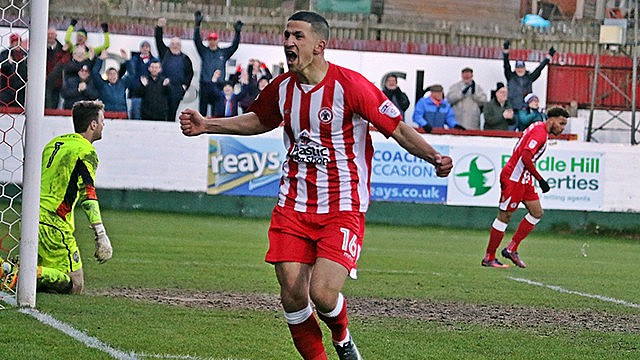 Noor Husin believes the Stanley players are in good spirits as they look to continue their unbeaten run against Grimsby this weekend.

The Reds haven’t tasted defeat in nine games and will hope to continue their climb up League Two against the Mariners.

Crystal Palace loanee Husin returned to the starting line up in the midweek win at Morecambe and thinks everyone is raring to get out on the pitch again.

“The mood in the camp is good and everyone is confident,” said the midfielder. “We just want to keep this run going and see where it takes us. Nine games unbeaten is a great achievement but we want to keep it going. To think we were down near the bottom but are now climbing the table shows how far we’ve come.

“A good run gives you confidence and we’ve been going into games thinking that we can win them. When you’re confident you can go up against anyone and feel like you have a good chance of winning.

“Personally it’s just good to get back in the team and get some more valuable minutes. Obviously I’ve been frustrated at not playing more and the gaffer has said that but I’ve just been trying to show in training what I can do in order to get back into the team. It’s all been good.