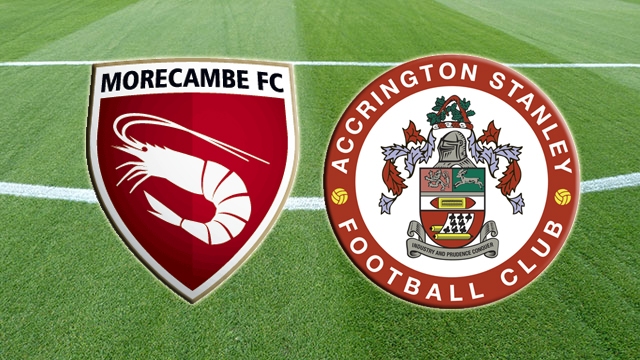 Stanley’s busy March continues tomorrow with a midweek away trip.

The Reds head to Morecambe for a Lancashire derby.

Stanley’s hectic March sees the next stop the Globe Arena as the Reds travel to take on the Shrimps.

John Coleman’s side head up the M6 unbeaten in eight matches and will be keen for that run to continue.

They were beaten at home by the Shrimps earlier in the season and will be keen to get their own back on Jim Bentley’s men.

The Reds are unbeaten in eight matches after drawing 1-1 with ten men at Yeovil.

Home form has been good of late, with Coleman’s men unbeaten at the Wham Stadium in 2017.

Coleman’s side sit 16th in League Two, a point behind the Shrimps in the table.

Midfielder Scott Brown sits out the first of  a five game ban for his sending off at Yeovil – his third dismissal of the season.

Sean Clare is likely to return to parent club Sheffield Wednesday for treatment on his ankle injury.

Arron Davies will sit out the game with a cut foot – he could be out for a couple of weeks.

Morecambe made a fine start to the season and were the early pacesetters but have had an up and down campaign since, with good runs followed by frustrating ones.

Uncertainty over the club’s ownership has seen then hit the headlines during the campaign but the players responded magnificently with a superb February that took them to the cusp of play-off contention.

They’re currently 15th in the table and a point better off than Stanley.

Jim Bentley was given his first opportunity in management when he succeeded Sammy McIlroy at the Globe Arena in May 2011, after being reserve team manager/first team coach.

He’d started his playing career with Manchester City and spent 5 years with the then Maine Road club before leaving to join Telford United.

After a near 5 year spell at the Bucks Head, Jim moved up to Christie Park in the summer of 2002, and went on to make over 300 appearances for the club.

He signed an extension to his contract to keep him at the Globe Arena until the end of the 2017/18 season in August.