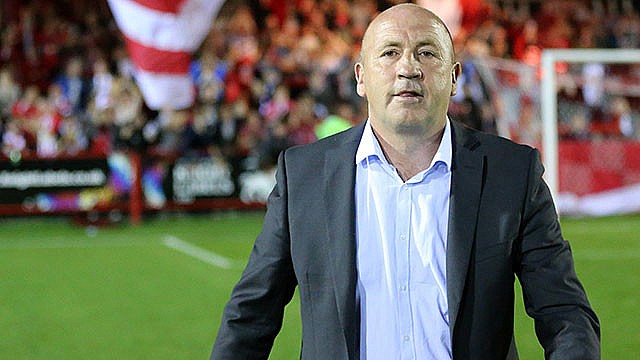 John Coleman wishes the season had started 10 games ago as Stanley host Cambridge in their final game in hand tomorrow night.

The Reds are second in League Two’s form table, behind Blackpool, with Stanley’s unbeaten run now stretching to 10 games.

Coleman’s side are 10 points off the final play-off spot and, after a relegation battle for most of the season, 15th placed Stanley are now looking at finishing in the top half of table.

“I just wish the season had started 10 games ago as the last 10 games have been Championship winning form,” said the Stanley boss.

“It can change quickly – you only have to look at Cambridge. They had a terrible run at the start of the season then they picked up and have a chance of making the play-offs and it shows what a run can do for you.

“An unbeaten run means the confidence oozes through the players, they want to score goals and they want to win games. I am not saying they were hiding when we had our bad run before Christmas but we did have a barren spell where we couldn’t buy a goal or a win.

“I was disappointed we drew on Saturday as we lost the chance to make up ground on those above us but we maintained our unbeaten record.

“We have had some spectacular finishes to the season in the past and if we have another one we will just see where it takes us.”

The Reds boss is still haunted by the game at Cambridge in October where Us goalkeeper Will Norris saved two penalties in the 90th minute from Chris Eagles and Terry Gornell, with Shaun Derry’s side down to nine men. Former Reds player Piero Mingoia made one and scored one for Cambridge.

“The game at Cambridge was the start of our bad run and our loss of confidence,” said Coleman. “Hopefully we can put that behind us and make amends for that.

“Piero is a great lad, with a good appetite for football and Cambridge were able to offer him more than we could at the time.

“Brad is also a great lad while Mark Roberts used to play for us and has had a great career.”