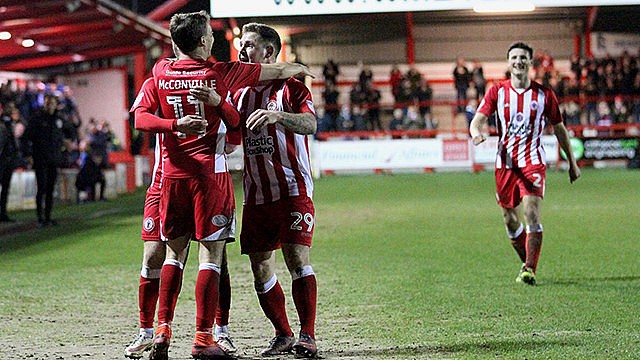 Sean McConville hailed one of his best nights in football after picking up two goals and three assists in the 5-0 home win over Leyton Orient.

The winger set up both Billy Kee and Matty Pearson from set pieces before scoring two stunning efforts himself and laying on Pearson to complete the victory.

The 28-year-old took the Man of the Match award and the plaudits, especially for Stanley’s fourth goal that saw him chip O’s keeper Charlie Grainger from the edge of the centre circle. 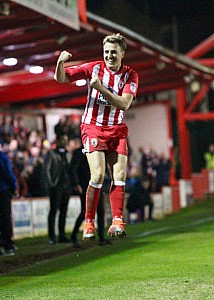 “I did it in pre-season. If you ask (youth team coach) Andy Gray he’ll tell you. We played Radcliffe away and I think there were about three people there,” he laughed.

“I looked up and saw him about ten yards off his line and we were 3-0 up so I thought ‘why not?’ I caught the ball nicely and got it on target. The lads are giving me stick saying it’s an own goal but I’ve checked online and everyone is giving it to me so it’s my goal bonus!”

“I don’t think I’ve had a better night. I was saying to the lads after the game that it’s up there with the best games I’ve played. I’ve probably had two or three in my career where everything goes right for you. No matter what happens you find a red shirt, you shoot on target, your passing is good and every time you get your man you take him on and nutmeg him.

“After a game like that you come off just thinking ‘wow’ – anything that could have come off has come off for you and I think that only happens a few times in a career. It was a pretty perfect night.

“I knew I needed to add more goals to my game and two more added to the total is welcome. Hopefully I can kick on and add more before the end of the season.

“You feel for Orient after the game but to be honest I wasn’t thinking about it during the game. You’re just trying your best to put them to the sword as they would if it was the other way round. I’ve been at this club before where we haven’t known if we’re getting paid and had a tax bill looming over us so I know what that’s like.

“I suppose the players have to hope it brings them closer together and they have had good away form. We thought we’d have to be on top of our game and thankfully we played well. Hopefully they can get out of the mess that they are in because they’re a really big club in this league.”