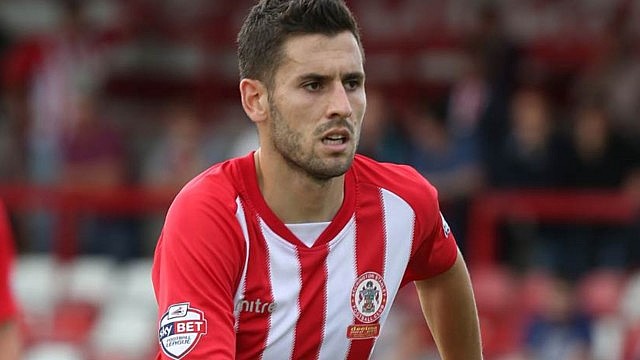 Seamus Conneely picks up the award for Community Player of the Season after attending a record number of community events throughout the season.

The Stanley player claims the title of Community Player of the Year as judged by a panel of representatives from Accrington Stanley Community Trust. He was presented with the award ahead of the reds fixture with Cambridge Utd by the Community Trust’s Head of Sport Lee Walsh.

Conneely has contributed a great deal both on and off the pitch this season. He is the nominated PFA representative for the Football Club and has visited a number of schools and community events in Hyndburn and surrounding areas.

“The PFA believes that players who make that extra effort and contribution during the season should be recognised for their support and involvement in the local community. This Award will hopefully raise awareness of the great contribution and importance many of our members attach to their roles off the pitch. We would like to offer our congratulations to this season’s recipient of the 2016/17 Community Champion Award.”John Hudson. PFA – Director of Corporate Social Responsibility.

The reds captain is one of the most influential senior professionals at the club and also given a lot back to the community outside of football hours and has been recognised for his contribution to community initiatives over the past year.

Martin Fearon, Community Trust Manager, said: “Seamus is the Ambassador of our Sports Participation programme and has supported a number of different projects throughout the season.

“His commitment is fantastic and is a great role model for the young children of the local area. Seamus goes beyond the traditional role of a professional footballer and is great at organising other members of the team during community events. Well done Seamus!”