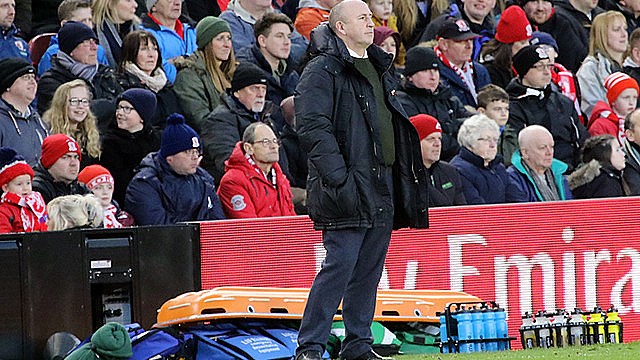 John Coleman sympathises with Morecambe’s off-the-field problems but is determined to upset them on the field tonight.

The Shrimps have faced ownership issues, with wages not being paid, but against the adversity they suffered just one defeat in 11 games up to February.

March hasn’t gone as well for Jim Bentley’s side with four defeats on the spin and Coleman understands the behind-the-scenes problems as Stanley have experienced them themselves in the past.

“They had a great spell at the start of the year, a similar run to ours, where fears of relegation dissipate,” said Coleman. “But they have been through the mill with ownership problems.

“It’s great credit to Jim (Bentley) and Kenny (McKenna) that they have rallied their players and had some great results which will allay fears of relegation, it’s a statement of how good they are as a management team.

“I know exactly what they are going through, it’s so hard when you are not getting paid as players have mortgages and families but in a perverse way you can use it to motivate yourself and get results in spite of all the problems. It has worked for us to an extent in the past.”

Stanley enjoyed bragging rights over the Shrimps for 17 league games – going back to 2006 – but Morecambe are unbeaten in the last three meetings between the two sides, winning two of the three.

“We had an unbelievable hex over them for a long time but they have turned it the other way,” continued Coleman.

“Last season we were 2-0 up and they got it back to 2-2 and I always feared that point would cost us promotion and that was certainly one of the factors.

“We haven’t beaten them in three games now and a couple of them have been Morecambe wins so it’s important we go there with the aim to get three points.”

Despite the rivalry, there are close links between the sides – shown recently by the Stanley players paying tribute to ex-Red Dean Winnard’s brother Mark who died in a tragic accident, holding up a shirt with his name on. Long-serving Stanley defender Winnard moved to Morecambe in the summer.

“I have been in touch with Dean and sent my condolences to his family on a couple of occasions,” said Coleman.

“I am sure everyone from Morecambe and Accrington are rallying around him as you need friends at times like this.

“Possibly football will take his mind off it a little bit and give him something to focus on. Dean is a keen competitor and I know he will want to beat us.”